- December 02, 2016
Something I love to do at this time of year is to wander around various stores looking at the different Christmas decorations that they have in stock. Last month, I even managed to get Flyfour and the Children to come along with me. Sometimes people think that I'm the outgoing one, the slightly crazy one who leads the rest of my family astray... it simply isn't true!

And I can prove it because I have photographs... 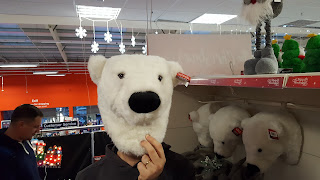 Flyfour and I found these Polar Bear heads hilarious. I don't think I could have them on my wall at Christmas time, but I do think that it makes my husband look rather handsome!

Further round the store, we found some Reindeer heads. Top Ender found these hilarious and was telling Rudolph what happened to Dasher, Dancer, Prancer, Vixen, Comet, Cupid, Dunder and Blixem after they poked fun of his nose! 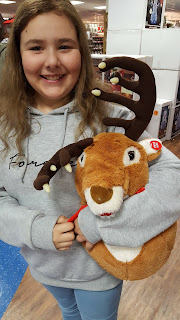 Top Ender also found the Polar Bear Heads hilarious and walked around the store with one under her arm, stroking it and saying things like "there there, bear, there there." 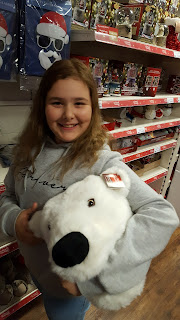 We didn't recieve too many odd looks...

Dan Jon Jr was most pleased with his find, an electronic light thingy. It's the sort of thing that you can get at the Panto each year and Dan Jon thinks they are great. 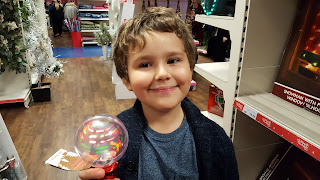 We did buy the new Christmas lights for our front garden (and thank fully our neighbour has said they don't mind the slight overlap onto their home seeing as it is Christmas) which look FABULOUS! 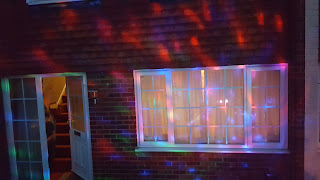 Do you like to wander around the Christmas aisles like I do? Let me know your favourite Christmas traditions that are slightly.... odd shall we say, in the comments!
Christmas Family Life