- December 12, 2016
A recent change of job location has seen my driving mileage increase from zero (because I used to go by train) to 75 miles round trip, each day.

As well as now experiencing the extra expense of owning, insuring and running a car capable of doing 20,000 miles a year, there is also the sad realization that every day I routinely pass a bump, shunt or accident, or have to get out the way of an Ambulance or Police Car.

Heaven forbid that I am ever caught up in such an incident, the idea of having a Dash Cam to be an eyewitness on the road is something that I have decided is essential (almost as essential as a DAB radio, but then that came with the car anyway).

So, a Dash Cam was quickly put on my Christmas wish list - only to be taken off when the nice people at Mio asked if I would like to test their MiVue 688 Dash Cam. 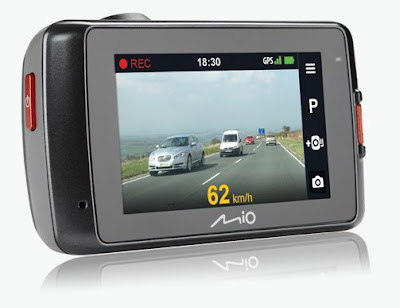 A few quick facts about the Mio MiVue 688. It records 1080p (full high definition) video, at 30 frames per second. The lens is by Sony, which they claim gives superior quality, especially in low light. You can download, for free, monthly safety camera warnings for as long as you own the device - provided you are not driving in France, where these are illegal. And finally, it has a built-in GPS so it can record some information about your driving - speed, altitude, longitude, latitude and heading.

It has a wide 140 degree viewing angle, so that more of the road can be seen, a lane departure warning system, which sounds an alert if you drift away from the centre of your lane, and a 3-axis G-sensor to detect sudden motion, such as a shunt or fast braking, to immediately protect that footage.

On powering up, the device announces "Welcome" and, provided it can get a GPS fix, immediately starts recording. It will record short clips in sequence until the memory is full, and then loop back over earlier clips. A few changes I had to make included changing the units to Imperial (ie. Miles not Kilometres) and I increased the default clip recording time to 5 minutes instead of 3 minutes. The instruction leaflet is quite sparse, but anyone familiar with setting up a digital camera or mobile phone should have little trouble navigating the menus. You can download a full manual at the Mio website which helped with some of the more detailed settings, including how to use the lane deviation warnings.


The unit is supplied with a charging cable with cigarette lighter plug on one end, and mini-USB on the other. This was mildly frustrating, as I am already using the car lighter socket for a twin-USB charger so I can also charge my phone - I was hoping for micro-USB so I could use spare cables I already own instead of the supplied charger, but I shall have to find a mini-USB cable instead. It also comes with a small windscreen mount. The USB power connector is in the top of the unit as they anticipate you mounting it at the top of your windscreen.

There is no memory card included - a micro SDHC card is required, and preferably one at Class 10 due to the speed needed to record the HD video. I was provided with an 8GB card for this review, from which it reserves 5.9GB for Video (approximately 50 minutes), 1.5GB for "Event" recording (ie. protecting videos in the event of an accident) and 76MB for Photos (as you can use the camera to take evidential snaps should you so wish). It will accept a card up to 128GB.

A software tool - the MiVue manager - is used to download any footage, and plot the GPS tracks and video footage against Google Maps. You can also upload your footage to YouTube and Facebook, should you be so inclined! 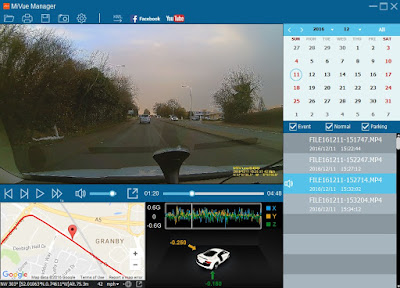 Safety camera updates are provided monthly - the update process involves downloading a small file from the Mio website, and copying it to the device SD card before power cycling the camera, where it then takes a few minutes to update the device. In use, I found the safety camera warnings duplicated those of my cars built-in Sat Nav, so I disabled this feature.

In summary, the Mio MiVue 688 is a perfectly acceptable Dash Cam, with good quality video footage. The added GPS gives extra value to the recordings by plotting important data against the video. Although the software is easy to use, the safety camera update system is cumbersome and some may find it less than straightforward. The charging cable is of an older standard and the position of the charging port make some assumptions about where you are placing the camera. The quick start leaflet is basic, but the online manual covers all the necessary settings and modes. In practice, once set up you won't return to these menus - I am using the camera daily, and - apart from the odd chime or reminder to "please turn on my lights" - forget that it is there. And that, like other safety devices in my car, is quite how it should be.

It is highly likely that, like airbags and daytime running lights, a built in Dash Cam will be mandatory in the future. But, until that day comes - and for older cars - a standalone Dash Cam is a definitely a sensible purchase and this particular model is at the upper end of capability and recommended.

The Mio MiVue 688 is currently available for under £150 at Amazon.co.uk. I was provided with the Dash Cam and memory card in exchange for this review.
Review Technology