- March 24, 2018
Waking up Friday morning, I half-remembered a conversation I'd been having with Flyfour the night before about what meals he would like this week, the only thing I remember him asking for was Nachos for Saturday night and the rest was up to me. Which is fine, because I had a few ideas based on things we've loved or fancied recently!

So here is what we are eating this week! 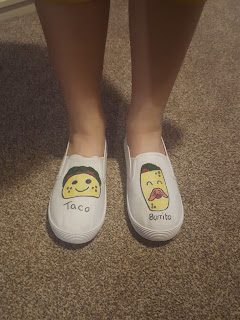 Flyfour asked for Nachos, just Cheese, Sour Cream and Salsa, no meat. Which is fine by me as it's Veggie, way under budget and a nice weekend treat.


During the week, I suddenly had a craving for Chicken in Honey Mustard Sauce and I said to Flyfour "Do you know what I fancy?" and he guessed the exact dish! I thought it must be fate and so added it to our list for Sunday as I knew he'd like to make it as opposed to some of the other meals planned for this week!


Poor old Dan Jon. I was talking to him about having another fish dish and he pulled the sort of face I expect from Flyfour when talking about fish! Dan Jon then admitted that he isn't that keen on fish... but Salmon and Prawns are alright because they aren't really fish. I then remembered that he picks fish each Friday at School, apparently, that is different because it's battered and therefore doesn't count as fish!

In honour of Dan Jon not counting Prawns as fish, we're having a Prawn stir fry tonight with extra prawns in the form of Prawn Crackers.

Tuesday - Spaghetti with Sauce, hidden vegetables and some sneaky Bacon


We made this last week, after sweating off some onions with some bacon, I added a can of tomatoes, some Italian Seasoning, a squeeze of tomato puree, a squeeze of garlic puree, a stock cube, a splash of GF Worcester Sauce, some pureed carrots and swede and a bit of water (swirled about in the tomato can!) and finally a lot of finely chopped mushrooms and just let it sit over a low heat for about forty-five minutes.

Everyone loved it, so I'm going to repeat it again tonight.


If we don't eat all the bacon in last night's pasta dish, I'll add some to tonight's Gnocchi bake. I will add spinach and anything else that looks like it's needing to be added from the fridge or freezer too!


I love making dough, especially when it rises and you end up with so much you think you'll be eating pizza for the rest of your life. We'll top them with sauce and cheese as I'm making them be veggie after the bacon from the last two nights!


Flyfour saw that a year ago I made some Salmon for us to eat as an evening meal (he had a picture of it come up in his memories) and said he'd like it again. I thought it would make a good Good Friday meal!


So that is what we are eating this week. How about you?
Family Life Food Main Meal Meal Plan