Three Trips to The Opticians

- November 04, 2019
It was time for Dan Jon, Top Ender and I to have our two yearly eye test, and for some unknown reason I couldn't book all three of us together, so I had to book appointments on different days and at times that were suitable for us all!

Mine was first and so after having dropped Flyfour off to at the airport one Saturday morning, I made my way to my local Opticians for my appointment. As they did my eye scans, I warned the person that my eyes aren't "normal" and that he shouldn't freak out or let the Optician freak out because it was something that the hospital had investigated after my last eye appointment and the one before that and all was well, and I didn't really want to have to go back to the hospital again if there were no changes! 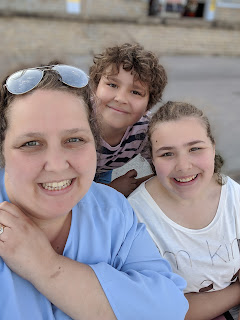 It was a good job that I did explain as yet again when the Optician looked at my scans they were a little freaked out until I explained about how my optic nerve looked and what it meant and what it would do in the future and how I'd ensure to keep my eye appointments in the future so if there were any changes they would be spotted. Despite that, the appointment was actually really great, with the Optician and I having a good giggle together.

The next appointment was Dan Jon's.

Dan Jon asked if it was okay if he went for his eye test alone. With the permission of the Optician, I sat outside in the waiting room, having a little giggle as I made faces at Dan Jon through the window in the door and him being unable to return the gesture because the optician was facing him or talking to him. 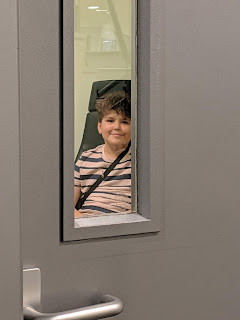 Luckily, everything was okay with Dan Jon's eyes and so we just had Top Ender's appointment to go!

Turns out, everything was fine and the optician just wanted to tell me that Top Ender was a little nearsighted, but she didn't need a pair of glasses and that we didn't need to come back for another two years.

So all three of us were great, our appointments were great and none of us needs to go back for a couple of years. Maybe I'll be able to book us all in at the same time!
Family Life Health