- November 02, 2019
I'm so excited! A month of sandwiches, although we don't have to have a different one every night like with the Salads back in February, so I might just end up repeating a few of the sandwiches as the children tell me what they like the most/what we seem to have in the house because for some reason despite me always buying all the things we need there is always something we are lacking by the end of the week thanks to some overzealous portion sizes, or more likely  snacking from the family between meals!

I'll make sure that I have a lot of good snacks available in the house, fresh fruit, cut veggies, cold cuts, bits of cheese, crisps and salad for Dan Jon and I... hopefully, this will mean we won't go hungry but that we will all eat healthy snacks if we are hungry! 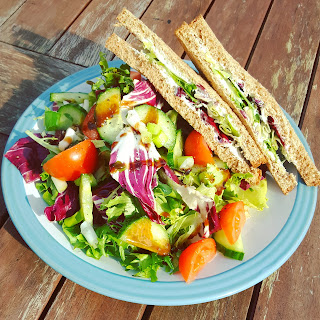 We love these chicken burgers, they are seriously tasty. We marinade chicken thighs (or breast fillets) in BBQ sauce and then grill them, before serving in buttery rolls. I would normally serve these with fries/chips but because that is what we are having tomorrow tonight I'll serve it with Jacket Potatoes (which Flyfour will hate, but hey I don't care because he's the only one that doesn't like them!) and coleslaw.


I feel a bit bad asking Flyfour to do this, as I'm really, really, really looking forward to this sandwich and if it isn't as lush as I'm expecting it to be I might think it's Flyfour's fault... BUT IT WILL BE AMAZING!

I'm going to suggest to Flyfour that he makes a garlic butter spread to go on the bread (and gives it a quick bake) before adding the meatballs which will have been fired and then simmered in a thick marinara sauce (I'll make the sauce in advance and accidentally put in a tonne of vegetables that I'll blend up, which will help make the sauce thick but also add in some extra veg to our meal) and then scooped into the sub along with some melty cheese.

We'll serve this with a side of sweet potato and carrot fries and some salad (because Dan Jon and I love salad!).


I'm going to get a ciabatta loaf and cut it in half (lengthways) spread one side with pesto (because I love pesto) and the other with the thick marinara sauce from yesterday and put some slices of mozzarella in the middle along with some spinach and basil and then squish it together.

I'll brush the top of the ciabatta loaf with some olive oil or melted butter and then bake in the oven until the cheese is all melty and then serve, or possibly just eat it all myself and not share with the children.

I'll do a couple of gluten-free ciabatta rolls for Flyfour and may accidentally make a couple extra for me to take to work tomorrow!


This is one of Top Ender's favourite fillings. I'll add in some chopped spring onions, some sliced peppers (possibly roasted if I have my act together) and some salad to fill us up a bit. I'll julienne some carrot, celery, cucumber and peppers too, to have with some dip as a side too. I'll give the children a choice of dips, but I have a feeling it'll be hummus they pick despite it already being in the pita with the tuna.


One of my favourite meals, when Flyfour and I were not long married, was a breakfast wrap. A slice of bacon, a sausage, a fried egg (or scrambled) and if I was lucky a hash brown. Tonight I'm making something similar for us all, but minus the bacon and the sausage so it's a nice veggie meal.

I'll scramble the eggs and toss in some chives or spring onions, some spinach and things like peppers and tomatoes (probably to Top Ender's disgust!) to add some bulk and of course some hash browns will be served either in the wraps or at the same time too.


There is something great about the mix of cod and bacon. I was originally going to make just a cod bap with mushy peas under the fish, but I thought I'd mix it up a little and throw in some bacon and serve the fish with bacon with slices of tomato in the baps with mushy peas and some mash.


Fajitas are a favourite in our home. There is something about the mix of protein and vegetables all in a floury wrap that makes it not only tasty but so addictive, to the point where you don't just want one or two but three or four or ten or eleven!

As well as the normal onion, peppers and mushrooms that I add to fajitas, I'm going to add in some slices of carrot, spinach, tomatoes and courgettes which when added to the chicken and spices will be nice and filling.


So that is what we are eating this week. What are you eating, or what are you borrowing from my meal plan for this week to have with your family?
Challenge Family Life Food Food Challenge Main Meal Meal Plan Sandwiches