I saw him in Asda and immediately I knew that I knew him.

This wasn't like the time I saw John Higgins in M&S and for a minute stared at him trying to work out how I knew him, whilst he stared back trying to work out if I was a crazed stalker, before we both sort of grinned at each other (I'm assuming he did, we were both wearing masks) and continued looking at the bakery together.

No, I knew this man. He wasn't someone I'd just seen on the telly, he was someone I'd spoken to before. 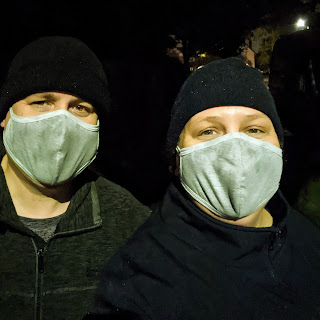 Behind my mask, I smiled at him, a proper one that reached my eyes. Behind his mask, he smiled at me and I could see his eyes change too. He wouldn't smile at me like that if he didn't know who I was. We knew each other.

So why for the life of me, could I not work out who the hell he was?!

I mentally rotated through every single person I knew. Those that I have interacted with during the last year or so, which thanks to Lockdowns, a global pandemic and my general dislike of people weren't all that many.

This was the face of someone I saw frequently.

Did he work at the local shop?
Did he work at a local takeaway?
Was he the guy who cleans my wheelie bin?
Did he go to Chuch with me?

Was he a contractor at work? One of the electricians or the guy who fixed the photocopier?
Was he a postman?
Was he an Amazon delivery driver?

I gave up on working out who it was.

And then I happened to be in Asda again and I saw him again. We smiled at each other, shared a shy little wave and then he and I went our separate ways.

The overwhelming feeling that I knew who this man was still surrounding me.

I chased after him, determined to work out who it was and how I knew them. I hadn't seen him for six months, but we recognised each other. We knew each other.

But he was gone, I couldn't find him.

The next time I see him in Asda I'm going to have to ask him who he is and how we know each other. Maybe by next April, we won't be wearing masks and without the lower part of his face being covered I may recognise him more easily...

Or maybe this is a mystery that will never be solved.