- October 11, 2021
Just before the world went to pot, the family and I went to an event at Bletchley Park that the Milton Keynes Islamic Arts, Heritage and Culture had put on, and as it was only a few minutes away from us, and we figured it would be fun.

When we saw there was a similar event happening again, I wanted to go and view again which is why after we'd locked up for the night Flyfour and I got dressed again and went to Central Milton Keynes Train Station to see a laser light show, that those watching could control! 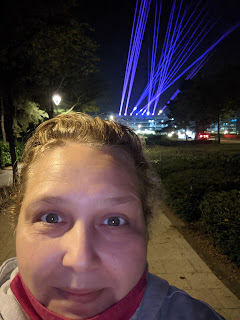 Flyfour was driving and so was unable to see the lasers as we approached central Milton Keynes, but I kept seeing flashes between buildings and was getting really excited seeing the lasers stretching what seemed like miles. 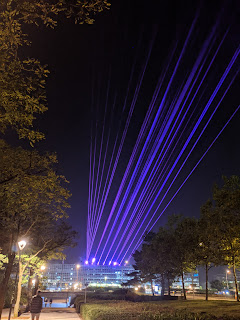 We parked a little away and walked down to the train station (famous for once being the Daily Planet and local buildings in Superman IV) to take part and ended up having a blast controlling the lasers from our phone when it was our turn. 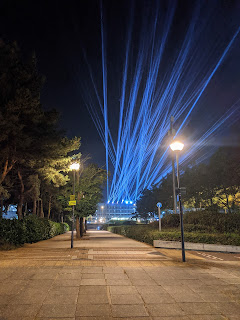 I had decided that I was going to do my bee dance with the lasers, and basically spelt my name (which is how I dance, I spell out words using my butt!) and directed local bees to where the good flowers were.

We went back the following evening and took the children with us (they were "strongly encouraged" aka told they were coming, but we also took flasks of Hot Chocolate so a little stick, a little carrot!) who also loved controlling the lasers and enjoying spending some time outside of the four walls of our home!

We are so lucky to live in Milton Keynes where events like this take place fairly frequently and that everyone in our family (some with a little more encouragement than others!) enjoys participating in them too.