- April 08, 2009
Top Ender was in the hallway this morning when the post came through the letter box. Knowing that I like to have the post to open and file and deal with, but that her baby brother was sitting the other side of the living room door she decided that it would make sense for her to pass it to me, by pushing it under the living room door.

Baby Boy was sitting in front of the door calling to his sister when a letter appeared before him.

"Mama!"
"Ooh Post, Mama's letters" I said
"No!" And he started to push the post back to his sister on the other side of the door.

Top Ender and Baby Boy sat either side of the door passing letters to each other for a few minutes before Baby Boy realised that if a letter could get through so might toys and fingers; So he stuck his fingers under the door and started to wiggle them.

As soon as Top Ender saw wiggling fingers she started to wiggle hers back which ended up with both children wiggling and giggling! 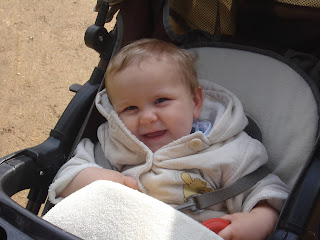