- July 23, 2016
Top Ender has gone off to camp this week with her Guides troop. On one hand I'm glad that she has gone off to camp, hopefully she'll break out of her shell a bit and have fun and enjoy a great break at the end of a successful school year, on the other hand I'm desperately sad because I'm missing her a tonne already and she hasn't even been gone more than three hours! 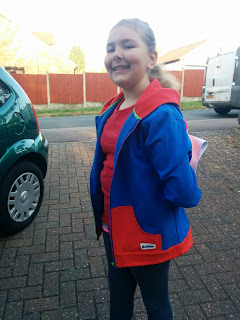 Luckily, I know exactly what is going on at the camp (thanks to a Camp guide that I'd downloaded for Top Ender and kept a copy of for myself!) from activities, to times of meals, shops that are available for the Children to purchase things from (Ice Cream, Souvenirs, etc) in fact I know everything right down to the food that they will be eating each morning and evening.

So Dan Jon Jr, Flyfour and I thought that we could have a bit of fun and eat the same as Top Ender this week. We have to guess a few of the options because we're not quite sure what Top Ender will pick, but we figure we know enough about Top Ender that we can work out her choices!

We're actually pretty sure that Top Ender will pick a Hot Dog instead of a Burger or a bit of Chicken from the BBQ tonight, but we have some really lovely Gluten Free Burgers... so we're going to have the burgers and I'm going to include a side of Chicken and Hot Dogs just to be covered!

Out of all the side dishes, we know that Top Ender will pick Corn on the Cob, so we're going to have some along with a little side salad too.

Dan Jon Jr was actually quite worried that Top Ender would miss out on her weekly Roast, but when I told him that she had a choice between Gammon, Turkey and Chicken today he decided we too should have a Roast Chicken, as long as it was served with plenty of Roast Potatoes, and Yorkshire Puddings.

Flyfour and I agreed that it would be perfect.

Normally we eat Meatless on a Monday, but we had decided after reading through the days choices that Top Ender would pick Sausages and Mash with Peas or Sweetcorn because there might not be enough Veggie Sausages to go round.

Dan Jon Jr picked the choices tonight, as he said that Top Ender wouldn't have picked the other options. Plus he really fancied Fish Fingers.

Pasta Bolognese with Garlic Bread would make a great meal on camp, which is lucky because tonight that is one of the options and the one we think that Top Ender will pick.

Dan Jon Jr doesn't like Garlic Bread too much, so I'm hoping if I make it soft and chewy rather than crunchy crusts that I'll be able to save it for the next day as soft and chewy heats up a lot better in the oven or the Microwave!

As we read through the meal plan for Top Ender's last night on Camp, we saw there was an option to have a Mild Chicken Curry. As both Flyfour and I love a curry, we figured we'd make it slightly more palatable for Dan Jon Jr, by serving it with Potato Wedges instead of Rice.

We're pretty certain that Top Ender would pick the wedges instead of the rice too.

It's our first meal back together as a family, so we thought we'd have something yummy. It took us ages to work out what we'd like to have as nobody could decide on something that we'd all like when I suddenly remembered our Slow Cooker Kebab recipe!

Hopefully the weather will stay nice and we'll be able to have it in the garden along with a pudding of Strawberries and Cream (which we had a couple of weeks ago and they were amazing) and plenty of Shloer and Fresh Orange Juice.
Family Life Food Main Meal Meal Plan