- July 02, 2016
Dan Jon Jr is off School today (inset day) and so together we are planning this weeks meals. We've decided that we're both really hungry so we want lot of yummy food, but we're not sure what. We thought we should probably eat lunch before shopping and meal planning, but it just didn't work out that way! 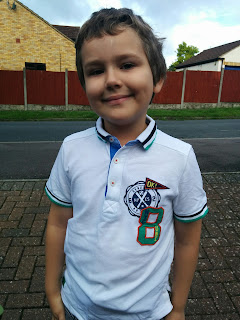 
One of our favourite foods here is Salmon, it's tasty and healthy and good for you and if we're honest compared to a lot of other fish it's fairly cheap.

We decided that we'd have Salmon Parcels today. All we do is wrap the Salmon with some vegetables and place them along with a little butter into the oven. It takes around twenty minutes and then everything is steamed to mouth watering perfection.


I asked everyone if they'd like Fish or a Chicken Roast for a meal this week, but nobody got back to me. I really like having the Fish on a Sunday (it's a good way of getting Flyfour to eat more fish) but I came across a recipe for Lemon Chicken this week which I thought would appeal to Flyfour because it has Olives in and he loves Olives.

I'm still not sure about Olives, but will get back to you on Sunday.


I love a good Mushroom Stroganoff and I thought with the new carpet having been fitted today, we should celebrate with a good meal.

As Dan Jon Jr thinks that Mushrooms are still stinky, slimy and possibly poisonous I figured I'd serve it with some Mash and some buttered French Stick to help the stroganoff go down more easily. Tops is going to spend the day looking at a localish University (yeah I know it seems early right? Due to the AG&T programme she is a part of she gets opportunities like this) so I'll bribe her to eat the meal with a good lunch and the promise of a pudding!


I've been really fancying pasta, but with the high carb content I really couldn't face the aftermath for Dan Jon Jr, so I thought I would make Bolognese stuffed Peppers. I will serve it with some rice and some salad because you know, we might as well have some carbs and make it a little more filling, but also because Dan Jon Jr and I have worked out how long it takes for him to digest rice!


When we have the hospital for Dan Jon Jr on a Wednesday, it has become traditional that we have a McDonald's or similar for our evening meal. I asked Dan Jon what he wanted tonight and he said he would like McDonald's.

So that's what we're having!


We didn't end up having them last week, Top Ender had been given a "prize" at School for being one of the best readers in her form and ended up bringing almost an entire pizza home left over from lunch and so we ate that.


Dan Jon Jr decided Sausages and Mash would be the best way to end this week, I can't say that he is wrong.
Family Life Food Main Meal Meal Plan