- April 28, 2018
This coming week sees mine and my Mums birthdays, so there are a few celebration meals being thrown in! My Mum and I have decided that we are going to see if we can stretch our birthdays out to at least Dan Jon's birthday in the middle of the month... 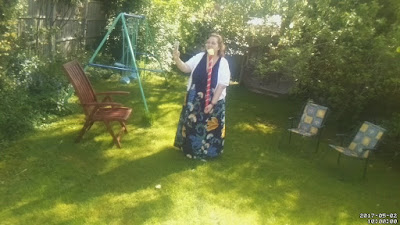 Top Ender is out at a Stake Convention thing today for the youth and as she is going to be out all day, Dan Jon, Flyfour and I decided we'd have super indulgent burgers for our main meal today. I think that Dan Jon is hoping it will end up Gourmet Burger style, with added extra's like Onion Rings and strips of Bacon, but I'm just hoping for something not too greasy.


I've said it before and I will say it again, Flyfour is a genius when it comes to Gluten Free Batter and as long as I can milk it I will get him making me Fish and Chips because of it!


I was explaining to my Mum last week, that we try to eat Meatless at least once a week on a Monday as part of the Meatless Monday movement, partly because as much as I love Meat I also love Vegetables and also because let's face it, it's a darn sight cheaper.

Anyway, I decided that tonight we're having a veggie curry with naan bread to mop up but no rice. I'm really hating rice since I accidentally gave myself food poisoning with it again!


My Mum is having her evening meal with us tonight, to celebrate her birthday. We had this when she was round a couple of weeks ago, so thought we'd have it again as she enjoyed it so much. Luckily we all enjoyed it too, otherwise, tonight might not have been the happy evening we're hoping it will be!


It's my birthday today, so I decided that we would have Pizza as a family. I'll be kind and let everyone pick their favourite, as I know that they don't all like the same as me. Oh and the stuff will be those little things I always crave, Duck Pancakes, Garlic Bread, Potato Salad, French Stick, Mozzarella balls and sun-dried tomatoes and anything else I fancy!


After the indulgence of the last couple of nights, I think we'll be more than happy with Toasties this evening. Plus when we had them the other night they were well lush and I've been craving them ever since!


I was trying to think of something that we would all like when I thought about Ribs. So, I'll throw a packet into a slow cooker and slow cook them all day and then come our evening meal time serve them with some Potato Skins (or curly fries as I know the way to Flyfour's heart!) and fresh homemade coleslaw.


So that is what we will be eating this week. How about you? Are you doing anything special this week or are you wanting a recipe of mine to adapt for your family?! Let me know in the comments!
Birthdays Family Life Food Main Meal Meal Plan