Rare and Vintage - That's Me!

- August 06, 2020
A few weeks back, the General Young Women Presidency of the Chuch I am a part of asked the Young Women to participate in a unique way to celebrate that the Young Women's organisation is 150 years old this coming November, by taking part in an activity related to the number 150.
I'll post in the next week or so about the 150 acts of service that I undertook (150 compliments were given, it was fun!), but today I'm posting about part of the 150 activity our Stake Young Women's Presidency undertook and how they may have accidentally given me the greatest way to describe myself ever!
The Stake Young Women's Presidency decided for their 150 acts to write to each young woman in the Stake and send them some chocolate. I would have shown you a picture of what Top Ender received, but she ate it before I'd even got home from work so I have no idea what it looked like, only that it was tasty and she didn't share with anyone, not even Flyfour. I can share a photo of my bar of chocolate! 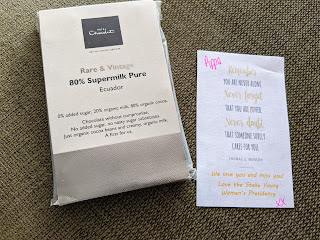 It seems that the Stake Presidency thought that it would be fun to also send some chocolate to the Ward YW Presidencies and today there was an envelope for me in the post. Inside was the aforementioned bar of chocolate and a quote, which means a lot to me because of how important it is for me to be reminded of the sentiment at this moment in time. 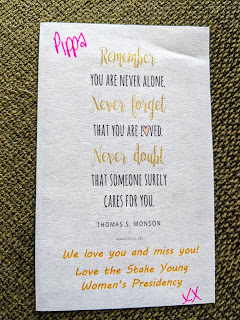 The chocolate is most certainly going to be a treat later this evening, and no I won't be sharing with either Flyfour, Top Ender or Dan Jon. It was the description on the chocolate that got me giggling, as I pictured the Stake YW's Presidency cackling together as they sent me the bar of chocolate as they conspired together about how best to have a giggle with each of the Ward leaders.
I had to ask one of my friends who is on the Stake Presidency if they had indeed cackled together sending it out, well let's just say she didn't deny it. 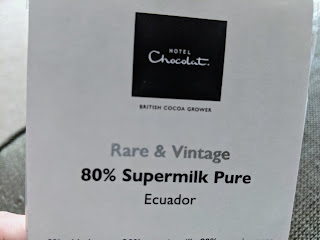