Who Knew You'd Be So Good At What You're Doing!

Recently someone gave me a compliment, although to my ears it wasn't really a compliment.

"Who knew you'd be so good at what you're doing!"

I wanted to reply back that the people that hired me to do my current job had. They hadn't just decided that it was easier to give me the role than to hire one of the other people who had applied. That they had listened to what I had said during the interview, had looked at my experience and thought about the ideas I had shared and realised I was a good choice... even though I'm still not sure I believe that. 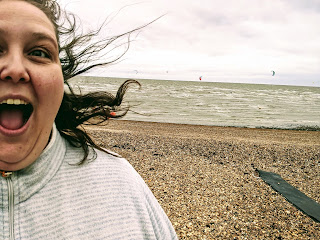 I wanted to explain that I was successful in my own right, that in certain circles I'm "famous" that I am regularly paid to take part in campaigns and participate in projects and asked to take part in documentaries not because of companies and productions needing to fill some kind of middle-aged fat woman quota, but because I am good at what I do, because I'm good at reading the tone and mood needed.

I wanted to give the stats and figures that I check every single day, for each of our social media channels, for our website and for the mentions even when it's not an @ mention but ones where the comments just mention us in passing. These are not just things I'm evaluated on, but these are things that I know are important, things that count and it's how I show I take this role seriously.

I wanted to show them my notebooks of ideas, the ones with scribbles and badly drawn diagrams and layouts and titles and quotes and bits of blog posts and paragraphs of me writing in other peoples voices. I wanted to show them the emails where people have thanked others for what they had written, or had said something like "Hit the nail on the head!" when it wasn't them, it was me. Me pretending to be them.

I wanted to say something, but I didn't.

I didn't because it wasn't said with malice. It was said with genuine pleasure that I was rocking the role I was now in. It was said because they had seen the changes and the engagement and were honestly in awe that it was me that had made it happen. They don't know about my past, heck after my interview one of the interviewers had said they had no clue what I had achieved and how much work it had involved.

And in thinking on it, on mulling it over and writing this post I've come to realise that actually they were right. Who did know?