- February 06, 2013
Last Wednesday night I put a status update out on the A Mothers Ramblings Facebook page (it links to my Twitter account) about how the children thought I was the best Mum in the world for having given them Home Made McDonald's complete with Cardboard Box and Toy. It was just a passing comment, I didn't think anyone would be that interested, after all you already know that we do home made McDonald's as I talked about it when we made our Cardboard Box Cars almost a year ago. 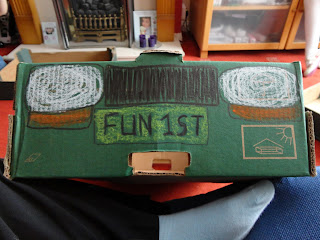 It seems though that everybody loved the idea and some requested more details so that they could plan a similar night for their families in the future. So here is what we did.

My first port of call was to a local Party Shop. There I picked up two cardboard boxes, picking ones that I thought Big Boy and Top Ender would like from the range. As they are only 35p I don't think they are really that expensive, and as I planned for the children to use them again for a home made McDonald's in the future  I thought they were actually a good bargain. 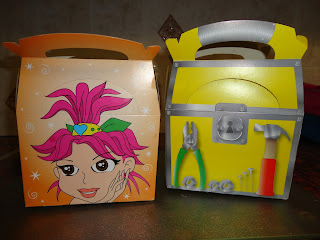 I spent most of the next hour walking around the local town trying to find little paper bags that you find inside McDonald Happy Meals. I did consider begging in the local sweet shop, but thought instead I should make some bags out of greaseproof paper. To make the bags, I cut the paper into rectangles before cutting in half. I then folded the paper in half and folded over the edges, to make a pocket. I used Pritt Stick to glue the edges down, being careful to make sure that the folded over sides wouldn't go near the food as I was pretty certain the children shouldn't eat Pritt stick. If I were to make them again, I might use Sticky Tape instead, but would more than likely not be able to find any.

Whilst I had been in town I had picked up some little treat toys from the many discount stores our local town has. I had found a resticakable Hello Kitty scene for 10p in one of the shops which I knew Top Ender would love, and a little Pirate notepad and sticker pack for Big Boy. As these were both already in plastic wrap I put them in the bottom of the boxes and hid them in the kitchen. I had some spare Ketchup and BBQ packs from a previous McDonald's visit and so added them to the meal as well as a Fruit Shoot which had been brought for lunches. 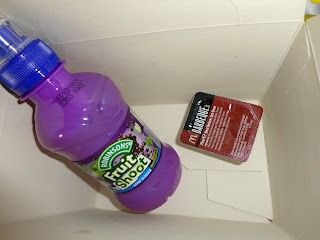 I had made Chicken Nuggets (same method as the Battered Lemon Chicken I blogged about before) and some chips and once they were cooked I added them to the paper bags I had made and let the children know that their personal McDonald's was open for business. They drove through, ordering their meals and having to drive to the different windows before being amazed that I had managed to produce dinner in a cardboard box and not only that, but there was a toy inside!

It's a great game and one that I hope the children will be willing to play with me for many more years yet!