The First and Second Week of May

- May 18, 2015
I love May, I think it's because of my Birthday being at the start of it, BB's being in the middle of it and the last week of it generally being Half term that some childhood part of me clings to May as being a good month. I've also discovered that May can also be a month of revelations, but the good kind and for that I think that January, September and May all rank as three of my favourite months of the year and my own personal "Start Over" months too.

With that in mind, here is May so far.

The First Week Of May


Week one saw me celebrate my birthday and put on a tonne of weight. It was unfair of me on myself to have let myself relax as much as I did and I know that in the future I have to be more balanced. If I do relax and eat a tonne of junk food then I need to remember to pair it with a lot more healthy living in the preceding and succeeding weeks.

Anyway. We had the Missionaries round for dinner the day after my birthday and I swear, not every member of the Church can play the Guitar, or indeed has one just laying around for Missionaries to play, it just seems that way in my ward! 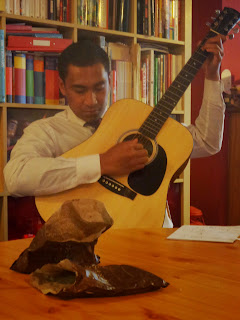 We went for a great family walk to see some Bluebells in one of our favourite woods. Normally I stick to a shorter circular walk, but we went a bit further in the woods as it was a nice enough evening and saw some amazing spreads of Bluebells. 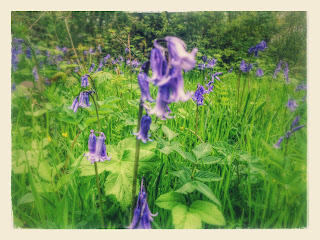 When Top Ender went to the Cinema with her Guide Troop (are they called Troops?), BB and I went to an American Diner. Not really knowing what to expect, BB ordered the adult pancakes and when they arrived... well lets just say it's a good job they have containers for Doggy bags! 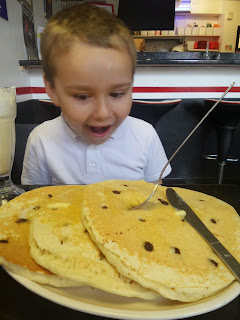 BB declared the diner his best restaurant ever, and I think we may become regulars as long as they keep serving pancakes for BB that is!

The Second Week Of May

On Saturday Morning we got up to the City Centre fairly early, as the children had been given a Promise Pet by Build a Bear and they had to go and help make it. They both chose Dogs, which surprised me because we aren't a dog family, something our five cats should tell you! 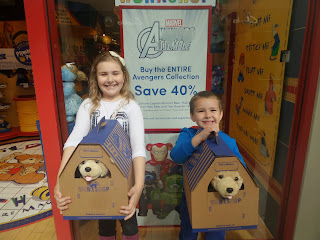 The Dogs were named Minnie (Top Ender's) and Gen (BB's) and have been showered with love and attention since getting home. I'll be writing a blog post about them this week, so look out for it as there is a lot about these Promise Pet's that you might not know yet!

The week was passing in a sort of just another week, until in the middle of the night or extremely early Tuesday Morning my Mum called me to let me know her Cat (who we got for her birthday almost one year before) had just given birth to her first kitten. My Mum stayed up the rest of the night counting Kittens and Placenta's being born and got to watch Dotty gently clean the kittens before eating each Placenta. 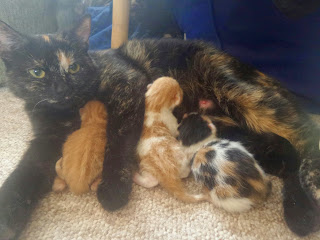 When I got round later that Dotty was discovering how demanding having three babies was, and was most grateful for the attention given to her, with a few special cat treats being presented to her to eat whilst laying down and feeding them for what seemed like the last 24 hrs. Obviously I don't know if this is true, but I assume the purring and rubbing of her head on my had indicated that she was happy!

During the middle of the week a friend mentioned that she and some of her friends, acquaintances of mine, had been talking about me. It wasn't in a gossipy way, well at least the way she explained it wasn't, but they were talking about how I'm always so positive and that they'd like some of the positivity drugs I must be on, or some of the alcohol I'm consuming to provide them with the same happy go lucky type of thing attitude. It was quite funny talking with her about it, because yes whilst I do smile a lot and seem so bouncy and positive, I'm sure that it is just an act as I'm secretly a depressed goth inside!

Friday had us celebrating BB's 7th birthday. I can't believe he is already 7, but it's true and I think that BB had a great day based on the number of smiles, grins and general happiness that we had together. 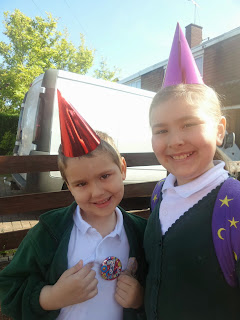 Daddy had taken a day off work so he could be here for gift opening and general family fun after School, which meant that we were able to take Tops and Daddy to the American Diner for dinner. Luckily they really enjoyed the meal too and agreed that it will become a firm family favourite because the food is delicious and the prices incredibly reasonable.

Top Ender spent the night on a Guide Camp, which was fine by BB as we spent the evening playing on one of his new Wii U games and Daddy, BB and I got fairly good together, however I'm not sure that we'll be finishing this game as quickly as some of the other games BB has had in the past!

May Has Had Me Decluttering

Well, not a lot really. Not because I don't want to be, but just because there is so much clutter I'm not sure where I should be concentrating my decluttering efforts. I've seen lots of chat recently about the Marie Kondo, "Does this bring me joy" method of decluttering and I'm thinking I should give it a whirl... but I'm also actuely aware that if I do do this I could end up with a very minimalist home!

So this is May so far for me and mine. How are you all and what have you been up to?
Family Life