- May 21, 2015
My children love their local Build A Bear store. Actually, they love all Build a Bear Stores and so I thought I'd share with you some of my top tips for getting out alive and with your wallet mostly intact. 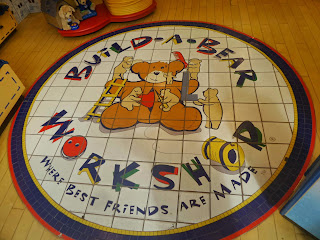 
Apart from having a really lovely card to put in your wallet, you will also have get vouchers sent to you periodically. Basically you earn 1 point for every £1 you spend and when you reach 50 points, you earn a £5 Reward Voucher.

The children use these vouchers for discounts on more expensive bears, and as they are valid for six months after issue, I tend to be covered if I need a discount on a major purchase like we typically make for gifts at  Christmas and Birthdays! Talking of which, in the run up to Christmas you can sometimes get offers, for example spend x amount and get a free gift voucher to spend in store. One year my Mum and Sister both gave Top Ender BAB clothes for Christmas and BAB Vouchers for her birthday a few weeks later.


Sometimes some of the accessories are a little pricey. You, know I know and I'm sure Build a Bear know it. Sometimes, it's nice to buy all the BAB branded items, but it isn't always necessary and you can sometimes find exactly what you are after in discount stores. The best example for me was when Top Ender wanted a replacement mobile phone for her Bear. She got a cheap one at the 99p shop, stuck a bit of elastic on the back and volia she had an accessory for a lot less.


One of the great things about the way stores are set up is that you can avoid the clothing section if you're smart. Don't get me wrong, the clothes are adorable but like the accessories they can be pricey and you can often find newborn or premie baby clothes that will suit the toy just as much and for a whole lot less! To avoid the clothing section, once your bear has been stuffed you can either turn the child so they face the naming station straight away, or position yourself between the clothing and washing station and direct their attention to creating the all important birth certificate.

As a family we keep a look out on ebay and local selling sites for people that are selling old bears and clothing, as these are either heavily discounted or in some cases being given away free.


Just try to make it clear to your child before you go in that you aren't letting them purchase anything other than the teddy, or that if they want an outfit they can only have X amount and so they have to spend less on the bear so they can have enough for an outfit.

Funny enough, this works well on children of all ages!


When you visit the store, it honestly is best to go first thing in the morning. I've been at so many different times, but visiting first thing in the morning when the store has just opened is so much better. I think that this may be because it isn't busy first thing, most people are not aiming to be at the shopping centre for 9am and the staff had all had their morning coffees and are for the most part well rested!

It's much easier to keep a child distracted in a short queue, whilst waiting for a bear to be stuffed than it is a long one so you'll feel less driven to drink than you would if you visited from lunch time onwards!

So they are my top tips for visiting a Build a Bear store and getting out alive and with your wallet mostly intact... do you have anything to add?
Paid Day Out Toys