The Sound Of Music - A Review And Music To My Ears

- May 28, 2015
There are some things that when your child says to you, you know that you've made it as a parent, as well as being a review of The Sound of Music, currently showing at Milton Keynes Theatre, this is the story of how I know I've made it as a parent, when Top Ender said something that was the sound of music to my ears...

Sitting in the Theatre watching The Sound of Music with Top Ender, I lent across and whispered I love this song, just before Maria and Georg sang "I Must Have Done Something Good". You see, I've seen the film version of this musical at least a zillion times, I can remember the first time I saw past the wedding, I have memorised not only songs, but huge passages of dialogue and yes even the dance moves too. 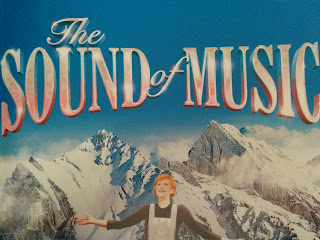 Watching it live made it a lot more, well real I guess. As Top Ender and I discussed on the way home good live theatre has a way of drawing you in, of making it real, of making you part of the performance you are watching. I know from having watched thousands of live musicals and plays in the past, that it's not only a good director or a good score and script that does this but a good performer that does this, and for a musical or play you need a cast full of good performers and The Sound of Music touring production that we saw certainly has this.

Anyway, the bit where I know that I've made it as a parent.

As we were walking back to the car, Top Ender asked if I would teach her more songs from musicals, so that like her Daddy and I, she'd be able to sing a million musical songs at the drop of a hat. That to me was my *made it* moment, and as we walked down the street, I taught her Edelweiss, the first in a long line of songs that I'll be sharing with her.

So, enough about me being fab and more about the Musical.

Well, if you're expecting an exact copy of the film version then you're doing yourself, the cast and the director a serious injustice. The musical is so much more, it's real, it's a living breathing entity and just a real thing. And yes, I do keep saying real because honestly it felt like Top Ender and I were the only people in the Theatre peeking in on the lives of the Von Trapp's and friends, instead of watching a Musical. And so, this is why if you are able to get to Milton Keynes to see this show, or to any other Theatre that will be having the touring production, that you have to go.

We were given tickets to the show. I could have had a glass of Orange Juice or even Wine, but I don't drink wine so I stuck with the ever expensive packet of Chocolate buttons... which Top Ender ate way more of than I did.
Family Life Music Paid Day Out Review Theatre