- June 08, 2016
Call us overprotective, call us crazy, call us what ever you want but we do blood tests on Dan Jon Jr roughly every two hours over night, every night. 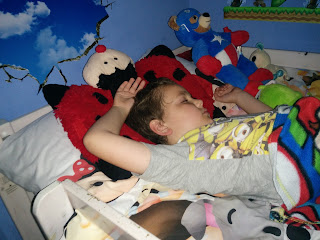 Dan Jon used to be able to wake up if he felt low, but now he doesn't recognise if he is low when he is asleep and so every other night Flyfour and I take it in turns, so that the other one can have a few hours of uninterrupted sleep.

Although, sometimes it doesn't work out that way, Flyfour normally turns the landing light on and that wakes me up. And because I try to do it all in the dark, I normally end up stubbing my toe on the bed which has me hopping round the bed and back to my side and that wakes Flyfour up.

Anyway, the point is that we're used to it. We're used to having disturbed sleep and not being able to fall back asleep and having conversations in the middle of the night where neither of us actually remember properly what we talked about because we were both half asleep.

Sometimes one of us is SO tired that the other offers to do their "shift" even though they know that means they'll do three nights in a row and be very tired themselves. I offered to take Flyfour's "shift" on Sunday night/Monday morning because he was going to be out late on the Monday night and with him leaving the house at 6am for work I figured I'd be kind and loving and you know wife like.

We'd done the midnight test. We'd done the 2am test and I was having trouble falling back asleep, so I was just laying there in bed listening to Flyfour snoring as he was fast asleep.

All was calm, when the Smoke Detector at the top of the stairs went off.

I punched Flyfour and made him go and sort it out, because I'm too short to reach it to shut it off (and was aware that none of the other alarms in the house were going off, so knew there wasn't a real fire) and so he went after a grunt or two. Whilst he came back to bed, and I went to check on the Children, just to let them know we weren't being burnt to a crisp and that all was fine. Both were awake from the alarm, but sleepy and Dan Jon Jr had fallen asleep before I'd tucked him back in.

Flyfour and I lay in bed. Hearts pounding from the alarm. Then I heard him snore again.

Great. Just me laying looking at the ceiling then.

Minute by minute ticked by.

At 3:16am, exactly one hour since the Smoke Detector started BEEPING, it started BEEPING again. This time Flyfour was as awake as I was and he went and took all the batteries out of the alarm, gave the house a once over and then came back to bed.

We both lay in bed. We were both wide awake now.

And then a noise started outside the house.

From our bedroom window we can see the driveways of four or five homes each side of us and looking at them we could see that there was nobody on the driveways and none of the neighbours security lights were on, so we figured that it was hedgehogs or foxes doing hedgehog or fox business (Ever heard two hedgehogs at it? They are noisy!) when all of a sudden a man started jogging from one of our neighbours house and up the street.

I recognised him, it was our neighbour.

WHAT WAS OUR NEIGHBOUR DOING GOING FOR A JOG AT 3AM?!

Ten seconds later and he was jogging back home, he jumped into his car and drove off.

Flyfour and I lay back down in bed.

We exchanged silly reasons of why our neighbour was jogging/driving off from his house at gone 3am in the morning and eventually fell back asleep, but not before Flyfour told me;

"And the worse bit is, you'll never find out why he was jogging up the road and then went and got in his car"


He's right, it is the worse bit.
Diabetes Family Life