- June 22, 2016
I watch a lot of Netflix, it is one of the brilliant benefits of having a TV in every room in my home and of course working from home. The Children and I tend to cuddle up on the Sofa once a week to watch something together and Top Ender, like me likes to have Netflix on in the background when she is working on something else in her room.

So, when we were asked if we would like to be part of the Netflix Stream Team we were excited! 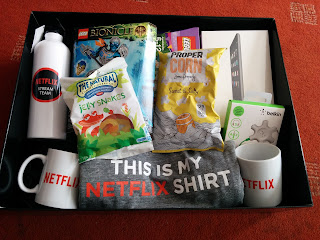 As I like to be transparent, I have been gifted the items in the box above (I did share the snakes but not the popcorn!) and my Netflix bill has been paid for for a year, (we've had Netflix ourselves for about a year!). However as always I tend to only really yammer on about things that I really like so you can tell that Netflix is really something that I like and not something that I've been paid to like!

If your family is anything like mine however, watching a Family Favourite can lead to a bit of an argument. Or seven. In our house not everybody wants to watch the same film, TV show or even the same genre.

Sometimes of course I settle things the old fashioned way.

However, I do like every member of my family to feel part of the process and Netflix obviously know enough about family life that they know this is a common problem and so they have created something which should solve all the arguments with a game of chance using a Netflix Fortune Teller! 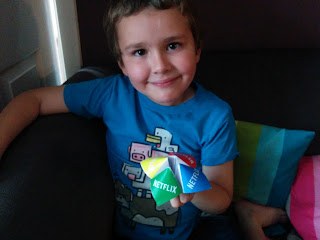 And so this is how after the Ward BBQ, if you had peered through my living room window you would have found Top Ender, Dan Jon jr, Flyfour and I snuggled on the sofa watching "Your Lie In April" and practising our Japanese!

And as I wrote the films/TV Shows in pencil, I'm pretty sure we can rub them out and put new films in the next time we can't decide what to watch!
Date Night Family Life Film Netflix Review Treat Night