I've been thinking about Remembrance Day and Armistice Day a lot over the last few weeks. Top Ender and I signed up to distribute poppies to our local neighbours as there weren't going to be as many collections in stores (although I've seen several) and of course, I get to help organise the collections at the school I work at too.

I was walking to work one rainy morning a week or so before Remembrance Day when I saw something that caught my eye having been placed between two fence panels almost exactly at my eye level. 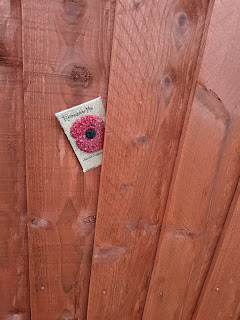 I remembered vaguely having seen something on one of the local Facebook groups about these poppies being left around the local area for people to take home and to remember the name of the person on the insert. So I took it to work with me, and later I did one of my favourite things to do. I researched Harold Frederick Brookes as I wanted to know as much about him as I could.

Harold was born in Fenny Stratford to Mary Ann Brookes and had three older sisters, Daisy, Sarah and Maud and two younger brothers Walter and Frederick.

They lived in Aylesbury Street, (a street I know well as it's the Street I was married in and both my children had their births registered at) and in Napier Street, again I know it well and is only a short walk from my home.

In 1914, he joined the Armed Forces and was soon a part of the 12th Service Batallion, part of the Rifle Brigade (Prince Consort's Own). I couldn't find out a lot about him during this time, but I know that from when he signed up that he volunteered.

Harold died on 22nd September 1917, and is buried in West Flanders, Belgium. 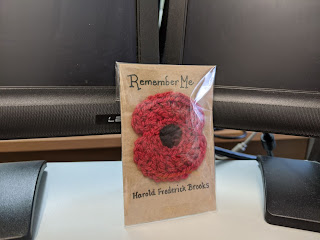 Today I'm remembering Harold and all the other men and women whose service will never be forgotten.