- July 18, 2020
I think I'm not the only one feeling a little like it's the end of everything at the minute, and I think that my meal plan for this week reflects that, you'll see there are a lot of "comfort food" dishes on the menu, things that I associate with being safe and happy.
In part, I think this ending feeling is because the children finished going to school for the current school year yesterday, partly it is because I've had a bit of a revelation in the last couple of weeks and it's also because I've reached a few milestones this last week with regards to my working life and made a few choices which could potentially be the death of me! I'll explain more in the future once I've digested it all.
Anyway, here's what we're eating this week and here's a picture of two beautiful bouquets of flowers I was given from a staff member and a student and her Mum. I was very spoilt! 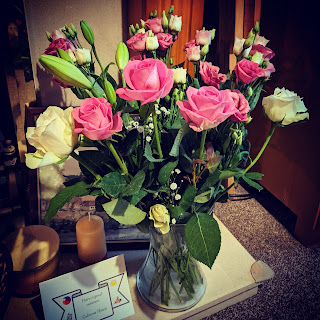 Growing up, one of my most favourite meals that my Mum would make in the Summer would be for when we had company and she wanted to spend as much time with the guests, enjoy the sunshine and not spend hours in the kitchen. She'd buy a Rotisserie Chicken, send one of the kids to the local Chinese for a couple of packs of egg fried rice and she'd prepare a massive salad. Easy, quick and tasty.

It would be served family-style, so everyone would sit around and help themselves and eat and talk and laugh and just enjoy being together and some of my favourite memories are linked to these meals. Despite trying to raise the children with the same love of this meal, I have a feeling they will just run off as soon as they are served. Flyfour and I will enjoy sitting in the garden having a laugh together though!

I'm feeling nostalgic, so a full proper roast is in order today too.

Is there anything better than a massive bowl of buttery pasta coated with salt and pepper and nothing else?
No. No there isn't.
As Flyfour won't be eating with us, it'll be proper pasta with gluten in and I'll be happy and full and covered in butter.

We were supposed to have this last week, but Flyfour misunderstood what I told him and made something for the family last weekend that was strangely familiar, but not quite what was planned... so we're having it tonight!

Wednesday - Fishcakes with something!

Last week the meal plans went slightly to pot, so we're going to have the Fishcakes tonight and again they should be with a cauliflower cheese or a dill sauce or something, I just have to decide what when I feel like cooking after getting home from work.

Again, Flyfour won't be eating with us so I'm going to get some proper bread, toast it and smother it in butter. I'll make some mixed beans in a tomato paste/sauce thingy and serve.
If the children are very nice to me I might even give them an egg, whilst I smother mine in slices of avocado!

Finally, I will have finished work for the summer... well actually not quite as I'll be back for a few days in August and probably a few more times than I'm supposed to be because I'm addicted to going to work!

I've decided that this means we get a celebration tonight however and we're having a Chinese because I love a good Chinese takeaway!