Flyfour and I love going for our evening walks, it gives us time to talk and plan and on one of these walks we were trying to think of a project we could do over the Easter bank holiday weekend together. There were several contenders, but in the end, we decided that we would spend the weekend clearing out the garage. 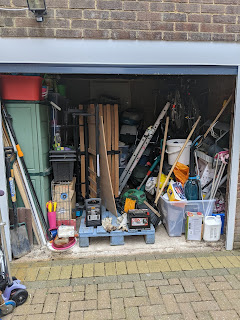 We assumed it would take us all weekend to do and so booked a tip slot for last thing Bank Holiday Monday and early on Good Friday morning (just before 9am) we were in the garage pulling boxes and piles of stored junk out on to the driveway and building the newly purchased (delivered in preparation earlier in the week) racking system.

Two hours later, we stopped as we'd sort of finished!

A few years back, Flyfour had purchased several large plastic boxes (Ikea) and had started storing our items in the boxes. This had made it easier to pull everything out, and thanks to the moon being in Sagittarius or something I was able to discard items we no longer needed that weren't in the boxes very quickly and even pulled out a few items from the boxes too!

It was very odd. I'm never normally this good at getting rid of things we have stored.
Once Flyfour and I had the racking up, we were able to put the boxes on the racking and we realised we didn't have a lot left to do. The boxes were pretty much empty and yes, we would need to go through them but we decided that we had all weekend to complete the task, so would come back to it at some point over the weekend.
Easter Sunday was looking to be a good day, so we decided to put on one of our local Facebook groups a few items that we didn't want to take to the tip, but we also didn't want to have the hassle of selling, whilst we finished off sorting out the boxes. It seemed that everyone that had seen my post on the local group and came to collect something was someone I knew or had some kind of link to. I didn't realise how many people I knew in the community... but then I guess I do work at the local High School, I am a Brownie and Rainbow Leader, I was a Governor at a Primary School and a Secondary School and of course went to Mother and Baby Groups in the area too!

Flyfour and I finished clearing out the garage, moved items to be in the right places so they were easily accessible, planted up five planters and made it to the tip (we did have to make a second booking to go a week later to take a few more items!) all between me disappearing off for hours at a time to watch General Conference. 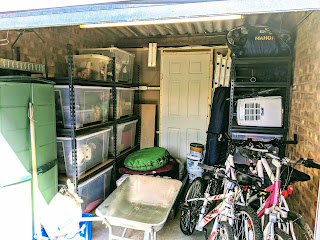 It was a very successful Easter weekend and we're just hoping that now we have a system in place we won't need to clear the garage out again!