- February 09, 2010
I never knew that watching Kids TV Programmes would be so beneficial. I mean I knew that my kids learnt from them, but I didn't realise other than the five minutes of peace that it gives me that *I* would learn from them.

It all started last week when Baby Boy and I decided to give the new Fireman Sam a try. We had seen a fire engine earlier that morning and spent the rest of the morning nee nawing around the living room. Anyway the episode was about how air feeds fires and the annoying kid Norman somehow managed to learn this at the Fireman training session.

Fast forward to Sunday and the idea that instead of any other form of potatoes we have deep fried chips with our oven baked Salmon and vegetables. Daddy, Baby Boy and Top Ender were all in the living room whilst I was serving up in the Kitchen. It was just time for the first lot of chips to be taken from the fryer and as I lifted the basket out my eye was caught by a pretty orange colour under the oil.

At first I thought that it must of been a chip that had been lost through the holes in the basket, when I suddenly realised that chips in bubbling oil don't turn bright orange. At this moment time slowed down. I remember calling out "Chip Pan Fire" in a matter of fact manner and Daddy appearing at the Kitchen gate.

It was at this point that I remembered the Fireman Sam episode so I knocked the lid of the chip fryer shut as I reached round to unplug it from the socket and wonder why the plastic dial at the front was glowing so orange. Surely if the oil was on fire then it would be contained in the metal pan?

The whole chip pan was on fire!

Having shut the lid however, there wasn't any air for the fire to feed on and it soon put itself out. A look this morning shows that the bottom of the metal liner has a small hole, which was the start of the fire I think. We really were lucky to have not had any damage to the kitchen, (or me!) and I think that it was all thanks to Fireman Sam and the annoying kid Neville. 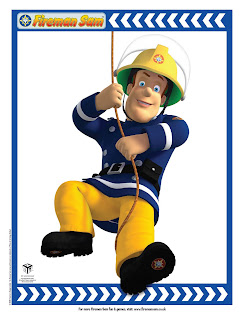 And just because I haven't been able to stop singing this since Sunday here is a YouTube video of the old Fireman Sam theme tune (you know where he seems like a pyromaniac as "He's always on the scene!")