Why Doesn't The Postman Love Me?

- February 24, 2017
We decided that we were going to have a PJ day during the half term and generally just chill out. There wouldn't be any housework, there wouldn't be any guilt if we spent all day on the consoles, or watching Netflix. All I had to do was remind the children to drink plenty of water and having made up some packed lunches and suitable snacks, they were able to feed themselves as and when they wanted to.

The children were playing a console game together and they were being rather loud, so I had taken myself back upstairs to my room to watch Netflix and actually be able to hear what I was watching!

So all was going well. I had my really scruffy PJ's on, with the really baggy top and I hadn't brushed my hair and my horrid rash was being horrid and bright red and cruddy looking. All I was missing was a face pack and rollers in my hair to finish off the "I don't care" look. 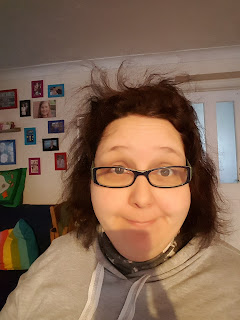 That was until I heard the parcel delivery postman knocking on next doors front door. Nothing to worry about there right? Well, yeah but I had heard them go out in their car first thing in the morning and I hadn't heard it come back so I knew they were out.

Now, this wouldn't be a problem if it was my "normal" postman. My "normal" postman loves me. He is the sort of chap that you want to be your postman, always quick with a joke, kind, and thoughtful. However, this was the parcel postman.

I don't think that the parcel postman approves of me.

I'm not sure if it's because of that time I answered the door in my PJ's and was a little cold (you know what I mean right?) and the poor chap didn't know where to look, or if he's read my blog and is annoyed that I've not mentioned him enough, or if it's because he is often forced to walk down my drive with heavy parcels, or if he just doesn't think I'm funny! The point is, I can see the look of disapproval on his face.

I had to act fast.

I had to get dressed because I knew that the postman would hop over the little wall between mine and my neighbour's house and would knock on my front door, to ask me to sign for the parcel on my neighbour's behalf.

But I'd promised myself a no housework day and so my bedroom floor was covered in the clothes I'd been wearing the day before but hadn't put in the wash box. I wasn't showered, I wasn't at all decent looking but there was only one course of action. I had to get dressed and the clothes from the day before were my only option.

I got dressed *just* in time to answer the door and sure enough, there stood the parcel postman. He didn't give me a look over, but he gave me his normal polite microsecond smile and I could tell I still hadn't got his approval. Not that I want it or anything!

I signed for the parcel and said goodbye and only then looked at myself in the mirror behind the door, where I found myself with my top on inside out and not only that but back to front as well! To top it all off I had a pair of socks hanging out of the bottom of my trousers and my hair was standing up all over the place!