- January 27, 2018
I'm loving the simplicity of having a few meals to pick from with the same basic ingredients. It has meant that I've been able to stick with a budget of just £50 to buy the weekly shop and apart from a few pence here and there I've mostly stuck to it, so I'm so proud of myself!

I was planning on doing the exact same meals next two months (February and March), but I think that I'll switch it up for March and have a few other meals, especially as I've noticed what meals the family has liked the most and which meals have fallen a bit flat. Dan Jon thinks it's brilliant the way that I'm also making sure that if there is an extra portion of ANYTHING, that it's being incorporated into something else or made into my lunch... although I am regretting using up a spicy sauce last week instead of BBQ for our Chicken Burgers as the Couscous I made up in the leftover sauce has rather a kick to it!

Saturday - Toad in the Hole


We're having a day out together, but I'm planning on us being home early enough that we'll be able to have Toad in the Hole for our evening meal. The real reason for this is I hate making it and if Flyfour is home, he'll make it!


We'll have a Roast with Trimmings (everyone loves the Gluten Free Yorkshire Puddings that Flyfour makes) and hopefully with extra Roasties because we all love Roasties! 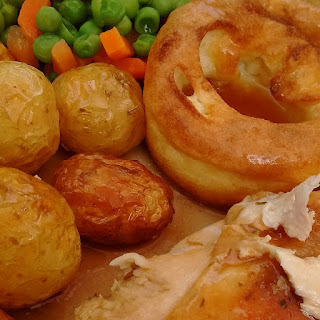 My Mum is going to eat with us this evening, or possibly just the children as I have a meeting and Flyfour will be driving home. I'm going to make BBQ Pork Chops. Now, I know this isn't on the master meal plan that I published back in December of how the meal plans are changing, but it is something I can make with almost all the same ingredients from the other meals, and this one means that they can serve themselves when they are ready to eat!

I'm going to serve it with a Green Salad and hunks of French Stick, which I'll put Dan Jon in charge of buttering as he loves to help out in the kitchen.


I love cooking little parcels of Salmon and Vegetables in just a little butter or oil. It always reminds me of a time when my Mum ordered Salmon minus any sauce in a Pub that was near my Grandparents home at the Seaside. The owner came rushing out of the kitchen to find out why my Mum had ordered "Naked Fish!", and since then it's always been called Naked Fish in our house!


I thought that the shopping seemed a bit pricey this week, so I figured some beans on Toast would bring the price down. Well, that is until I remember how much a loaf of Gluten Free Bread costs.


Is there anything nicer than a bowlful of pasta mixed together with Veg? I'm sure you can think of plenty of things, but I think this Thursday all four of us will be pleasantly pleased for such a simple (and cheap), flavoursome (and cheap), colourful meal. Did I mention this is also cheap?!


I'm going to attempt to make some Fish Burgers... My plan is that I will make Fish cakes, shove them in a bun and serve with wedges and call it a job done.

Hopefully it'll work and if not, what are you eating this week that I can come and eat when my Fish Burgers go wrong?!
Family Life Food Main Meal Meal Plan Money