- January 13, 2018
I've always thought, that when I do the weekly shop, that I'm quite good at sticking to a budget. I've realised in the last couple of weeks, that prior to the change of the way that I do the Food Shop I was terrible at sticking to a budget! This is changing now, as not only am I sticking to only a few different meals, but I'm trying to stick to a strict £50 a week... and I'm mostly doing it. I mean going over by a few pence each week isn't too bad, is it?!

Look, I think considering I'm knocking about half off the budget each week that I'm doing great!

We really enjoyed these last week like REALLY enjoyed these. They are the Tesco own brand Vegan Burgers and they were amazing, especially considering they are £1 for a pack of six.

We had them last week in seeded gluten free rolls, with some mayo and some homemade wedges and can't wait to repeat it again tonight. Poor old Top Ender is missing out again though as she is at another Girl Guiding Camp.


Top Ender will be back early this morning (but not early enough to make Church) and will be joining me for Choir rehearsal after Church before coming back home where hopefully we'll be eating this. It's really an oven baked chicken with a vinaigrette dressing that it gets baked in.

Monday Soup and a Roll


Dan Jon will be leaving us tomorrow for a School Residential. We are both so excited and nervous about it, so we're having Soup and a Roll for our evening meal, just so that for our dessert we can have something super special. 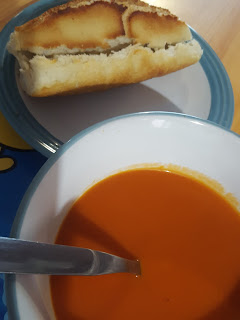 No, I'm not bribing my child to want to come home to me!


Top Ender will be off out this evening to Youth, and I'll do the same as I did last week and hang out at the Chapel knitting to stop me from snacking on things at home! Although saying that, I may make the most of not having any children at home and actually go and talk to my husband!


Flyfour asked for a Taco Bowl for his Birthday Treat meal this evening, based on our favourite dish from Tortilla.

We're going with Steak as our protein of choice and we'll eat it with Top Ender after she is back from the Brownie Group meeting that she helps out at.


I was feeling rather kind to Dan Jon, and decided to have the Risotto with Fish this evening, rather than tomorrow, just because I knew that Dan Jon, whilst he loves my Risotto, he really isn't a fan of having it too often!

I know that there will be a portion or two left over, so I'll have it for lunch tomorrow and ask Top's or Flyfour if they want to take some to work/school too.


I am such a fan of Pesto. I would happily eat it in Toasted Cheese Sandwiches, as a Salad Dressing, on eggs, instead of Pizza Sauce, smothered over Chicken and about a million other ways. I guess that tonight we'll just have to have it on Pasta and be happy. 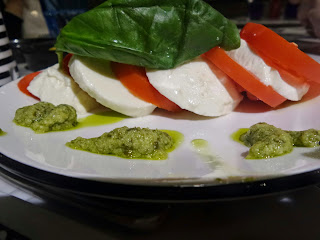 And we will be because Dan Jon will be home with plenty of stories to share about the last week!

So that's what we are eating this week, how about you?
Family Life Food Main Meal Meal Plan