- October 10, 2018
In the last post I talked about Seminary, The Seminary Challenge, I said that we were waiting on Sepli to get his revenge. Well, it turns out we didn't have to wait long.

The morning started like any other. We had our breakfast, we set off to pick up the lovely young woman whom we give a lift to each morning (she lives just around the corner from us, so it makes sense!) and headed off to the Chapel.

I unlocked the gate, leaving Tops and our friend in the car (it's cold early in the morning)! and drove into the deserted carpark. 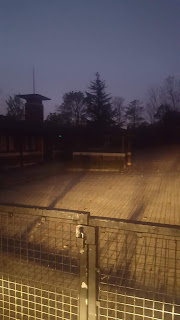 As it was so cold, as soon as we got into the building, instead of turning right to the classrooms, I turned left heading to the clerks' office to turn on the heating in the classrooms, because I didn't want all the youth to freeze to death.

Top Ender, being nosey decided to follow me, as she had no idea how to work the heating system in the building (I only knew because one of my friends had shown me!) and figured in the future she could head down to the office to turn the heating on, if I decided I wasn't getting out of the car because of the cold!

Our friend headed down to the classrooms. 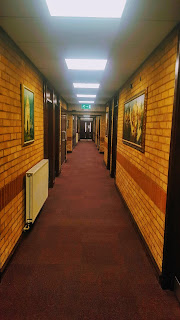 Now at this point, I should note that when I had unlocked the front door, I had actually locked the top lock. At the time, I just figured that whoever had left the building last had accidentally not locked it and locked the bottom lock only.

I just didn't put two and two together.

Suddenly there was a bit of a commotion down the other end of the corridor, as our friend had been surprised by the Seminary teacher and Sepli jumping out of the dark classroom!

The only problem of course, was our friend had had nothing to do with the original prank, only Top Ender and I had been behind it, our friend was just "forced" into it because she was with us... so I guess they didn't quite get their revenge.

Hasn't stopped Top Ender and I plotting our next move however!
Family Life Funny Religion