Why Food Banks Don't Want Your Out Of Date Food

- October 24, 2018
The School that Dan Jon goes to each Autumn asks the children to donate food items to a local Food Bank. Each class is assigned a different kind of food, there are ten different classes with around 30 children, so a lot can be donated. I remember a couple of years ago the chap who was sent to collect the items couldn't believe how much was being donated and was so grateful for the support from the School.

Last year, Dan Jon's class had Biscuits, I went out and purchased several boxes and individual packets, to donate. It was within my budget, but it wasn't something I had originally budgeted for if you see what I mean. This year Dan Jon's class has been assigned pasta in a can (like hoops or spaghetti), Dan Jon was eager to take in a can and so emptied my pantry of my stash of value Spaghetti Hoops, and over the weekend, I purchased several more. Not to stock up my supplies, but to pass on to the food bank. 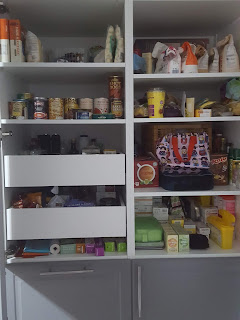 Now, I'm not being all sanctimonious here. Yes, I donate food items every few weeks to the collection points in the local supermarket (basically when I remember) and my Mum and I do a special shop in November each year where we buy everything on the Food Bank shopping list, but I do kinda forget that it is a weekly need for the Food Bank to have items to give to those who need it.

Then last week, I heard some parents say some things that really got my goat.

"If people are hungry enough, they'll eat whatever I donate to the foodbank" was the general gist. With it being implied that clearing out their own pantry of the out of date, not used food at the back was what they would be donating.

I get that times are tough. I get that some people are needing to spend less on their weekly food shop. I get that they haven't got to the point where they need to use a food bank, but that they don't have the money to go out and spend on food items that they and their family won't be using.

However, I don't get it.

I don't get how they think that the food in their cupboard that they couldn't, or wouldn't, make a meal from is acceptable for someone else to use because "they are hungry enough".

I don't get how people can't spend 60p on buying a couple of tins of value spaghetti, even if they have already done the weekly shop.

I don't get how they don't understand that they didn't use these cans of food, but expect others to.

I don't get how we are in a position in this country where there are people who need to use Food Banks.

I don't get why it's them and not me.

All I do know is that, I will not be donating out of date food (which will more than likely be thrown away), but starting right now I'm going to ensure that no matter what my budget each week, that I'm going to be donating to my local food bank.
Food