So This Was Christmas

Christmas was different this year, but also exactly the same as it always has been. I woke up super early and sat as close to under the tree as I could, reading my book before retreating back upstairs to the warm bed, where I promise I didn't stick my cold feet on Flyfour in an attempt to wake him up because I was bored and didn't want to read more of my book.

Eventually, Flyfour did wake up and we woke the children up with breakfast (Pigs in blankets in rolls) and opened our Stockings together, before getting dressed and going downstairs to open the gifts under the tree. 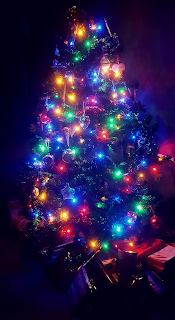 Flyfour opened his gifts of shoes, a drill, some screwdrivers, the Pat Sharp book and a computer game. Dan Jon opened his gifts of a computer game, books for his foreign coin collections (and some additional coins and notes), a "Would you rather" book, a whole pile of long-sleeved T-shirts and yet another computer game. I opened my gifts of a new Canva subscription, some new shoes, a new dress (actually several but Sssh!), a new book and a special gift that I had no clue about as Flyfour purchased for me a Velvetiser from Hotel Chocolate!

And then it was Top Ender's turn.

She opened her gifts of revision books as something she needed, a jumper, yet more revision books and an IOU for having her ears pierced once we are out of Tier 4 (our appointment was supposed to be just before Christmas but all plans were cancelled). And that was when she realised that she was missing a gift.

We pretended that we had no clue where this fifth gift was, and I suggested that maybe it was upstairs with her gifts that I was giving her for her Birthday, so I'd go and have a look whilst she opened the curtains.

And with her turned to open the curtains I started filming.

Yeah, we got Tops a car thanks to having been able to save up during the lockdowns this year and because Flyfour didn't think he could keep the secret until her birthday it meant this gift got swapped with a Christmas gift.

We think it went down well.

So that was our Christmas. How was yours?