I have a TV Stalker

- August 29, 2009
Before Top Ender was Top Ender our bedtime routine had a slot for watching Bear in the Big Blue House. If you have never seen it, then you won't know that a couple of minutes in Bear sniffs you through the TV screen and then normally says something like; 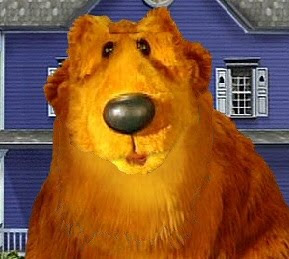 "Tell me did you just have toast with honey on it? Cos you smell sweet like honey"

It all got a bit weird however and I even commented on it to a co-worker. Bear in the Big Blue House was stalking me. Yup, you read that right a character from a TV programme started stalking me and it wasn't just me being paranoid.

On the first day I noticed that he was following me he sniffed me and then he told me I smelt like the beach. I had got back from Nanny B's that day and one of the last things I had done was walk on the beach.

On the second day, I thought I would confuse him and so I had a bath and he sniffed me and told me I smelt clean and like bubbles. I haven't felt comfortable sitting on the sofa in my pajamas since.

On the third day, we had been swimming and I still had that chlorine smell about me, as I like that smell and didn't want to shower it off until the last possible second. He told me I smelt fresh like a swimming pool.

On the fourth day, I ran in from the kitchen brandishing a knife as I was busy carving a pumpkin for Halloween, and he told me I smelt spicy and sweet like a slice of pumpkin pie.

I think I scared him into backing off by brandishing the knife as on the fifth day he didn't sniff the chocolate I had been rolling around in and said that I smelt of grass... I figured he knew I was on to him.

Every so often I will tune into Bear in the Big Blue House, with a morbid curiosity to see if my stalker is still watching me by sniffing something that he would only know he could smell if he had been following me all day and you know what? I think he has forgotten that I know how to brandish a knife...