Stop Playing with your food! I've already done that for you!

- August 22, 2009
Since Top Ender weaned, there has been a fascination on my side of things in making food look fun (and I am sure that her fascination with Big Cook Little Cook was a contributing factor here), so that she would try new foods and because sometimes its nice to do something unexpected!


Then I was reading Alpha Mummy about the creator of some fantastic sandwiches and I read the comments that some have said about it being a waste and that the children only pick at things and I started to get a little angry.
You see this is what started it off. Top Ender wouldn't eat peas. She couldn't be convinced to have one pass her lips until I made this; 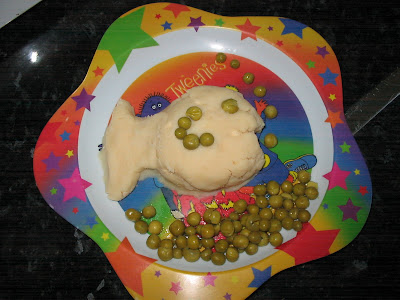 That's right its a mash potato and crumbed fish in the shape of a fish, swimming above a seabed of peas. Oh and little tiny pea air bubbles escaping from its mouth, and it has a pea eye and fin.
I remember that night clearly as she ate every single pea without complaint, and begged for Princess pea pie the next night (which I made but can't find a photo of), which she again ate every single bite of!
So of course the next time we asked her to try something she hasn't had before the answer was Not on your life. Until we presented it to her in a more appetising way. 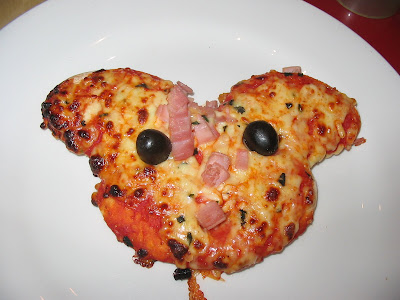 To be honest, I didn't make this. We got this as a meal for Top Ender at Disney Land Paris. But we had been trying to get her to try Olives. She took one look at the Mickey Pizza and pulled an Olive off and started to chew. She then spat it back out and looked at us horrified, but she tried it!
Then just the other night I decided that Top Ender deserved a bit of fun. So I made her dinner that evening three of her favourite foods; Hash Browns, Sausages and Baked Beans. And whilst trying to come up with an idea of what to make it into I realised this could be a Butterfly very easily... 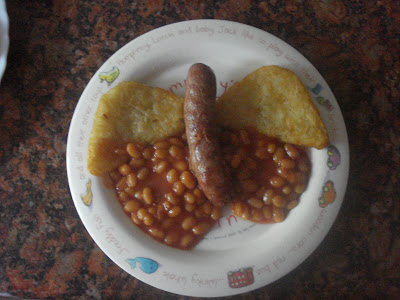 So as you can see that is what I did. When Top Ender came to collect her plate she was so amazed at her Butterfly, that I didn't even get any complaints that I had used "proper" sausages with herbs in. She just ate it without complaint.
Now I don't want you thinking that Baby Boy gets left out of all this, he gets his fair share too. In fact this was his breakfast this morning, Pear, Grapes and two small pancakes. It's not the Mona Lisa, but my kids know talent... 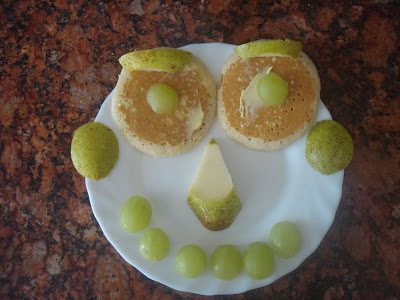 As he ate it he pointed to the various features on his face as he ate the ones on the plate. All the while saying "Yumm!", so breakfast was not only healthy but a learning experience too.
So stop telling children to stop playing with their food - do it for them!
Family Life Food