- May 29, 2010
Mummy forgives me for a small personality problem I have. Basically, once a year, normally on a Saturday night in May, I insist that all phones are switched off, all children are sent to bed, I am armed with a pen, pad of paper, and insist on spending 3 or so hours going "where the heck is Moldova" and "Is Georgia a country? I thought it was a US state".

Yes, I like the Eurovision Song Contest. And it's on tonight. And Mummy has decided that I can make my second guest post in its honour.

A little history for those that aren't familiar with the contest. Basically, all the countries of Europe, excluding Italy (who think it's naff despite winning it before) but including Israel (who get invited because they are part of the European Broadcasting Union), get together and sing individual songs, whereafter all the other countries ignore the song anyway, and vote for whatever country they (a) are next to or (b) have bailed them out of something.

Hence why Greece and Cyprus always vote for each other, Ireland, Malta and the UK all cling together, and a host of countries in Russia and Eastern Europe, who weren't even countries when the first contest happened in 1956, win every year because there are more of them and therefore win more votes. Ok, not every year - sometimes a real good song from somewhere more traditional wins just because it's that bit better. 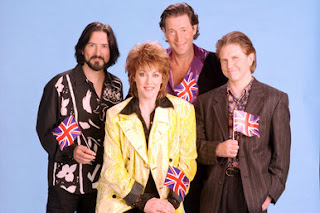 I really enjoyed it that year. We thrashed the rest of the competition. It was a good song, a good performance. I started watching it in 1990, and waited a fair time for that win. Sadly, I have waited another 13 years without another, but at least I saw us win once. And I watch because I have this weird idea that maybe, with the right song, a whole lot of luck and absolutely no resort to bribery, we may one day win it again.

So, to honour this most odd and unusual coming together (read: clash) of cultures, I have compiled my Top-10 Eurovision songs and memories from years past. See how many of these you remember!

10. Francis Ruffelle. Yeah, I know you don't remember this one. But back in the day, the UK used to pick the SONG rather than the performer, and Francis was the artist chosen to perform for the UK in 1994. She then appeared on a TV show singing a range of songs, and "Lonely Symphony (We Will Be Free)" was chosen to represent the UK. It came 10th. It sticks in the mind because, to my ears, she sounds rather like Cyndi Lauper, and I used to catch the Number 32 bus to the Sunday Market every other weekend, and the driver always had the album "Twelve Deadly Cyns (And Then Some)" on in the bus.

9. Terry Wogan. There are a million anecdotes about Terry and his views on Eurovision. I don't actually share a lot of his views on the contest - any attempt at derision used to vex me somewhat, as I really enjoy most aspects of it whilst Terry took it a lot less seriously. But, what was good was that, before he left for pastures new, he did get a chance in 1998 to swap his microphone for the stage, and host the contest from Birmingham (somewhere most of Europe has never heard of). In fact, he actually managed to present from the stage AND do the commentary over the intros too. But his best moments - his anglicized attempts at French. Wonderful pronunciations of "Madame et Monsieurs, Bienvenue a Concours Eurovision de la Chanson" or thereabouts. Thank goodness for the fluency of...

8. Ulrika-ka-ka (Johnson)! Who got a laugh even bigger than the winner Dana International in her astonishing hat, when an in-vision scorer from somewhere in Europe mentioned that she had once taken part in Eurovision herself, courting the wonderful Ulrika response of "A long time time ago was it?".

7. Ken Bruce. Whose wonderful Radio 2 commentary meant that the Eurovision Song Contest was the only programme I routinely watched with the TV sound off, and the Radio on. Descriptive, informative, funny wiithout being sarcastic. And sadly, since the advent of Digital TV, I can no longer do this - as the radio gets there about 5 seconds before the picture. It's like watching a badly dubbed kung-fu movie!

6. Diggi-Loo, Diggi-Ley - The Herreys. I wasn't very old when this Swedish song won in 1984, certainly I don't remember watching it live. But I did manage to acquire the 7" single of this, in a large box of 7" singles that I bought for £4 at the Sunday Market (see number 10!) and actually prefer the B-side, Every Song You Sing. It goes a bit like this: "Every song you sing, every tune you play, every photograph that you give away. Every time you smile, when I see your eyes, how I'm hoping that I'll be yours someday. All the words of love, in your melodies, makes me wait even more patiently, for the day that I can hear you say that you did it all, just for me". I used to think it kinda sweet. Now seeing the lyrics written down, it's really about a famous persons stalker isn't it...


One of the Herrey's murdering the same song in 2007

5. Riverdance. The only interval act in Eurovision history to get a longer applause, rousing standing ovation and greater respect than all of the acts put together. Enough said.

4. Ronnie Hazelhurst. Famous for writing songs for S Club 7 (if you believe Wikipedia), and the themes to Last of the Summer Wine and Some Mothers Do Ave' Em, BBC conductor Ronnie used to conduct the orchestra for UK entries. And, if you can believe it, songs like "Love City Groove", a Rap song (thats almost an accurate typo!) entered by the UK in 1995, had to have a full orchestra backing to abide by Eurovision rules. They did away with the orchestra in favour of allowing backing tracks some years later, but there is a rumour the orchestra may return. Sadly, the late Ronnie Hazelhurst, who I recall once conducted the show with an umbrella, won't be around to help out.

2. Ireland. Actually I was going to leave it right there, but I suppose it deserves more of an explanation. Between 1965 and today, Ireland have won 7 times, including 4 wins in 5 years between 1992-1996. And they have managed this because they have catchy songs, strong ballads, ethnic overtones - the works. Alone singer-songwriter Johnny Logan, who they call Mr Eurovision, has won it twice as performer and once as songwriter. They may even be the bookies pick for an outside win this year, by selecting their 1993 winner Niamh Kavanagh to return. I like them because, although most of the entries are now sung in English, in the good old days Ireland had the only other songs you could sing along with. So an Irish win is almost as good as a UK win!

1. Don't Ever Cry - Put. An obscure end to my Top-10 countdown, a Croatian song that came 15th with just 33 points in 1993. But it marked the start of something new - it was the first time Croatia had performed not as part of Yugoslavia, but alone. And this heralded a new era of entries, and wins, from new countries - former Yugoslavian and Baltic states. But, as well as being memorable for that, it tops my chart because it is just a fantastic song - from its "Star Wars" opening to its memorable harmonies, great sentiment and even a chorus sung in English.

So, that's the end of my rather long post. I think this is why Mummy doesn't let me write many.. And I don't know if tonights contest will give me anything new for this list, but if we all keep our fingers crossed and chant... "Royaume-Uni Douze Points" ad nauseum, you never know!
Family Life