Gone rock climbing (On the Telly and everything!)

- May 30, 2010
Do you remember the blog post I did back in February about 99 things? Well I said that some of the stories were cool so here is one that is a little funny/cool!

Many Many Moons ago (fourteen years ago but Ssh!) there was a TV channel called Trouble. A lot of teenagers who had Sky TV would watch it.

I didn't have Sky TV.

I did have a great Theatre Studies class though and one day they were asked for some students to be put forward who would be willing to be in a TV Show to be shown on Trouble. It was going to be a sort of Teenager version of Blind Date called "Its in the Jeans". Instead of Cilla Black we got Ortis Deley (him that's on The Gadget Show these days) and Lucie Cave...

I did have to tweet Ortis to remember Lucy's name, but this was only because of a social faux pas of mine, that meant I will forever remember the name Ortis Deley.

You see when Ortis walked in to the room to meet all his little blind date contestants, he asked us all our names. He didn't introduce himself. Everyone knew who he was. He was famous. He was on TV. He was on Trouble, the TV channel that we were filmimg for.

I didn't know this did I though? I didn't have Sky TV did I? And so I said;

I know I must of sounded like a right cow.

But I have gotten ahead of myself. Back to the Theatre Studies class and a break meeting for all the Sixth former students, where what was needed was explained to us by our very lovely Theatre Studies Teacher Linda. All those interested had their names put into a hat and then a few were pulled out and I wasn't lucky.

A few days later however one of the girls realised that if she went for the filming of her date she would miss the last day of our schools Help Week. It was a big deal for her at the time because the Sixth formers would come in wearing Fancy dress on the last day of Help Week and she had a great costume planned.

So I swapped with her, I went on her blind date on TV.

I don't remember the name of the boy that I ended up going on a date with, (so we will call him 'Ollie') I do remember that we went Rock Climbing at The Castle Climbing Centre and that it was really corny. This can be highlighted by a very clear memory of a joke I made.

I was at the bottom of a climbing wall with 'Ollie' (the boy I was on a "date" with) up the wall. I was belaying* (holding the rope tightish so that if he fell he wouldn't fall far) and got a great idea for a joke. I actually told the crew that were with me to film me for a minute, because I was sure that they wouldn't want to miss this.

I very gently tugged the rope that was attached to us both and called up to 'Ollie';

"Hey 'Ollie', guess I can say I really pulled you!"

This produced much merriment from the very bored production crew who had higher hopes than following round two teenagers on a fake date for their careers. I then had to say it again, in exactly the same tone and timbre and cadence and all the other words that mean the same thing at least ten times. The only thing was that nobody told 'Ollie' that I was going to have to do it at least ten times and the very last time that they filmed me saying it he shouted back down;

"I heard you the FIRST time!"

I think there is a swear word missing from this quote.

As you can probably guess I don't think he liked me that much and the date didn't really get much better. I mean I had a fantastic time, it was great rock climbing and abseiling but he made his feelings quite clear when he had to pretend to pick me out of a bunch of other girls from Polaroids.

That's what he went with. I had a nice smile. Obviously I do have a nice smile, but you know he could of said "She looks pretty" or, "She looks really fun", or "Even though she isn't my normal type I think she is hot", heck I think I would of settled for "The one with the big boobs". It was okay though as I was dating Chris (no silly mistakes here I am not mentioning his last name in case he Googles himself. I learnt from Sally at "Who's the Mummy?" little mistake the other week!!!) at the time.

At least I think I was. This might of been before we started going out... I get confused easily you know.

Anyway as part of our date we had to sit in the cafe at The Castle and pretend to be into each other and he magically made a paper flower appear to give to me.

It was as bad as it sounds.

Still it means that I went rock climbing, and was on the telly and had a story to tell you all. I did have a video sent to me of the show, but the wrong video was sent to me and I got my friends who went to a Pottery place for her date and I never thought to call them and ask for another video at the time. So I have no proof of this. Unless Lucie or Ortis want to back me up. I am sure they remember me... and if they happen to have a video of me then maybe it should stay hidden eh?

Oh and my friends date that went to the Pottery place? Of course they acted out *that* scene from Ghost. Problem was my mate was quite a bit taller than her date and had to be Patrick whilst he was Demi... 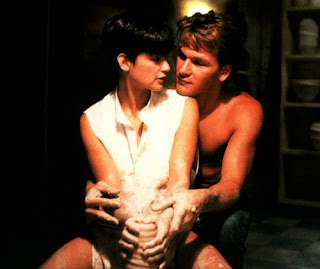 *With thanks to Sara at Kitty Eden who told me what the proper terms for Rock Climbing were as opposed to the silly phrases I was using!
Family Life Funny