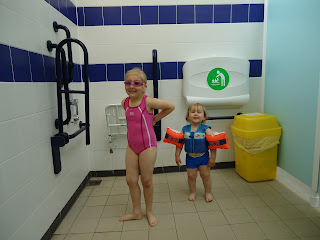 As is ususal on a Monday night when Top Ender has her swimming lesson, Baby Boy and I go for a swim too. We are lucky with our brand new swimming pool having some very nice large family changing rooms and so after swimming whilst Top Ender and I get dry and dressed Baby Boy air dries whilst wearing a hooded towel and tends to run around looking at whatever he can find.

I was mostly dry and so Top Ender and I were standing on my towel; I had just gotten my bra on when I suddenly realised that Baby Boy wasn't at my feet. I also realised that the door was unlocked...

"Where's Baby Boy?" I asked
"Erm? I think he has gone outside" answered Top Ender as we both looked around the cubicle hoping we had missed him in the big open space.

I suddenly realised I had a choice. I could either chase after Baby Boy in my bra (and nothing else as I had no knickers on yet), pick up the very wet towel on the floor or quickly put on my trousers.

I chose the latter.

I walked quickly out of the cubicle and could see Baby Boy just a couple of meters away (just past a Dad who was waiting on his son to get dressed) and so went to catch up with him. At this point Baby Boy ran away from me towards the pool. Luckily at the last minute he veered away from the actual pool and went towards the shower cubicles, where he was cornered and therefore easy to pick up.

I walked back past the Dad (in my bra and trousers) carry Baby Boy, and was given a strange look. I figured that he was looking at me like that for having let Baby Boy wander out of the cubicle and then there being a gap before I appeared to chase after him, so smiled sweetly at him.

The rest of the evening passed without too much hassle (well I did hassle the Man in McDonalds to vote for me in The MADS but that is another story) until I went to the toilet later that evening.


As I was sitting there I thought it was a little odd as I could see the bathroom floor in the black of my trousers, and so examined a little more closely. The seam of my trousers was split. Anyone who had seen me from behind that evening would of seen my (rather cute) butt.

Finally I was able to work out the look that the Dad at the pool had given me. He had seen me rush past him in a bra and with my butt exposed...