The Brio Pull Along Helicopter

- June 25, 2010
Yesterday Baby Boy was really excited about the postman coming; I told him that when he did there was going to be a parcel for him to open. At the slightest sound from the front door he was running to the gate to check if it was for him. When the parcel did arrive he sat waiting for me to open the outer packaging before he could delve in to see what had arrived for him... It was a Brio Pull Along Helicopter from the online store Hello Baby.

"It's a PLANE!" screamed Baby Boy as he looked in the box "PLEASE OPEN MAMMA!"

As soon as the Helicopter was out of the box, Baby Boy stared parading it up and down the living room. If I stopped watching him march up and down I was reminded that my job was to watch him as long as he wanted me to by an excited;

The Bright Green Wooden Helicopter is made by the Swedish company Brio and has a bright Orange non-removable pilot. It is suitable for children aged 19months plus and kept Baby Boy and Top Ender amused just walking it up and down the living room. It is a great toy for encouraging children to walk and at £9.99 is a very reasonable price.

Baby Boy loves the Helicopter and decided that it was going to go everywhere with him. He had lunch with it, he sat with it whilst he was on the potty and he took the Helicopter to school when it was time to pick up Top Ender. I had to walk behind at a suitable distance so as not to get in his way... 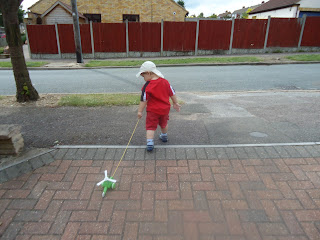 It ran as well on the pavement as it did on our carpet as you can see in this short video!

Even when the Helicopter falls over due to over excited pulling it rights itself, which was just fab as I didn't have to worry about flipping it back over!

There are a couple of things that I noticed with this toy, that did make me wonder. The first is that there is no aglet on the end of the string that the child holds. After just a few hours of playing the string started to fray, this was easily solved with a quick couple of coats of clear nail varnish. The second is also about the string and that due to it being long enough for a child to pull along behind them it can only be used under supervision, again no problem for us but just something to be aware of.

When Baby Boy took the toy to school, the Helicopter bounced around a bit and the paint on the wheels became chipped and started to flake off. It hasn't affected anything, other than aesthetics for me; Neither Top Ender or Baby Boy have noticed and they still squabbled over who got to play with the helicopter!

If you are looking for a toy, or a pram or one of the many other things that Hello Baby sell then you should head on over and take a look at everything they sell!
Toys