A Day Out In London With Big Boy

- April 27, 2012
One of the reasons why I need a new handbag is because when we go for a fun day out with the family my current handbag is normally stuffed with spare clothes, notebooks, drinks and treats. It's a regular Tardis! All this extra weight has taken its toll with ink stains on the front pocket, zips losing their pull and holes where bags shouldn't have holes. Anyway it's still my trusty Tardis like bag and so when Big Boy and I went to London earlier in the month for the Warner Brothers Bloggers Day, I took my trusty bag and Big Boy took his. His bag was more fun than mine as it contained Top Enders DS, his ipod and a map of bus routes near our home. I'm not sure why BB thought he needed the bus map but with us it went.

When we got to London we had a great time with the gang at Warner Brothers. Big Boy loved playing with some of the team with the new Superhero Lego and it has led to a little bit of a Batman revival in our house. I never knew I knew so many Batman characters! I was given a lot of information about other ways to watch movies at home, including how to use those UltraViolet Digital copies that you find in the Warner Brothers Blu-ray Triple play packs and also managed to make a couple of the team very jealous of our 3D projector setup! I'm pretty certain I should hire Daddy out to create a similar setup in others peoples homes. The best part of the day for me though had to be when Big Boy saw a HUGE Eric from Happy Feet and decided to wrestle with him. Even Big Boy realised that a six foot penguin was going to overpower him and posed for this picture; 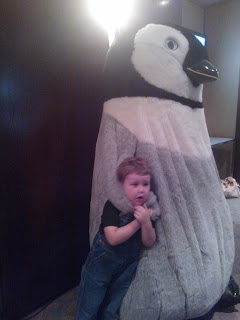 On the way home we popped into M&S to get some lunch to eat on the train ride home, but Big Boy soon decided that he didn't want to eat his lunch (he wanted to eat it at home with Top Ender as an after school picnic, which was sweet but annoying he needed to eat his lunch!) and so he had a quick look through my bag to see if he could find anything and he found a few Mr Kipling Cake slices. Mr Kipling were quite generous and sent a few cake slices along with some other bits for a Family Day Out (which we will be going on soon) and Big Boy approves wholeheartedly! 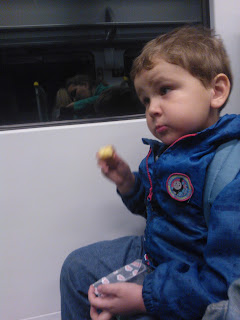 Spending the day with Big Boy was great fun and I'm sure that before he goes to School this September we will have plenty more.
Family Life