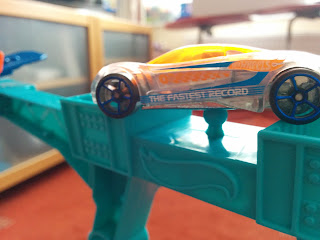 Me? I'm rather less enamoured with them. They are small and go under my sofa and then I have to stick my hands under the sofa and risk losing them to monsters who live amongst the dirt and dust bunnies.

However, I'm a kind Mummy who when she gets offered track builder sets agrees to review them because she knows it will make her son happy. 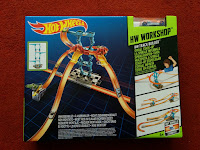 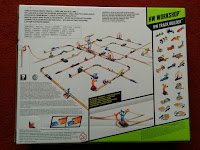 Even if the inside of the box does frighten me by looking like this... 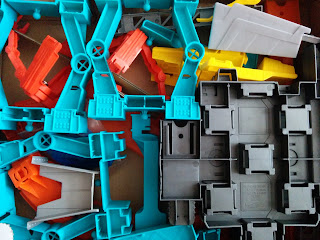 So BB and I set about building the track, it was a little hard going for BB because whilst he is a whizz at following instructions for some toys, the Hot Wheels track instructions are just beyond him. Eventually we had it built. I'm not sure if it was built entirely correct, but it was built enough that BB could let his cars zoom all around and basically be some kind of mini stuntman. 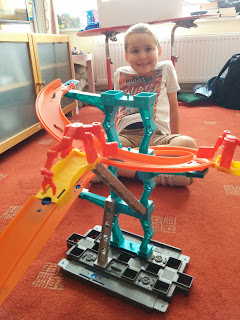 And if you want to see the track in action, this is just a little video of clips I managed to get of the car in various positions on the track... it's a lot harder than it looks to film a moving car!

So what do we think?

Well, it was a pain to build as I made a couple of wrong placements of the clips that hold the tracks together. I didn't really understand the instructions, which could just be me to be honest, but then I don't have a great track (ha see what I did there) record when it comes to Hot Wheels.

It is however fun, BB has spent hours sending his various Hot Wheel cars down the various tracks and just laughing manically when they fly off into various distances after coming off the edge of the track.. I'm sure it's something he'll grow out of right? Right?

PS There is an exclusive promotion: buy five Hot Wheels cars to get your hands on a free, limited edition Black Car!  For more details go to HotWheelsPromotions.co.uk

We were given the Hot Wheels Spiral Stack-Up Track Builder in order to provide this review.