#BeSuper Your Whole Life Through!

- April 28, 2015
Top Ender may be 11 going on 24, but there is one thing that is guaranteed to have her giggling like the School Girl she is with her friends, no not sharing secrets via whatsapp with her best friends, but watching a Barbie movie. Honestly, if you haven't seen a Barbie movie you won't know how they are actually really good. There are jokes and comments that parents will understand on a deeper level than the children, but the children still find hilarious. Top Ender is now at that magic age, where she can find both the adult and child jokes hilarious and some of the times she looks at me as if to check that she is actually understanding the hidden layer of the joke right... that in itself is worth watching them a million times or more with her!

Barbie and Mattel thought it would be a lot of fun if we had a #BeSuper Party because, Barbie's latest film has Barbie being a Superhero and a Princess. I know, it makes no sense to me (well actually it does because most children I know want to be some combination of superhero and royalty) but that's what the movie is and Top Ender has watched it about a zillion times and yes I'm ashamed to say I do know the words to all the songs and have caught myself singing them at moments where I should be more grown up!

And also they sent over the pack because today (28th April 2015) is National Super Hero Day! Fab right?! I love days dedicated just to me...

The problem for Top Ender was who to invite and because of our schedule when to invite them. So Top Ender decided to have two parties, one with her cousins and one with a School friend. For the first party Top Ender decamped to my Sister's house to party with her cousins. And by party I mean, they sat on the sofa and watched the Barbie film together scoffing Popcorn and other treats together. Top Ender left them with some little Make Up purses and a copy of the film, as she already had the DVD at home. 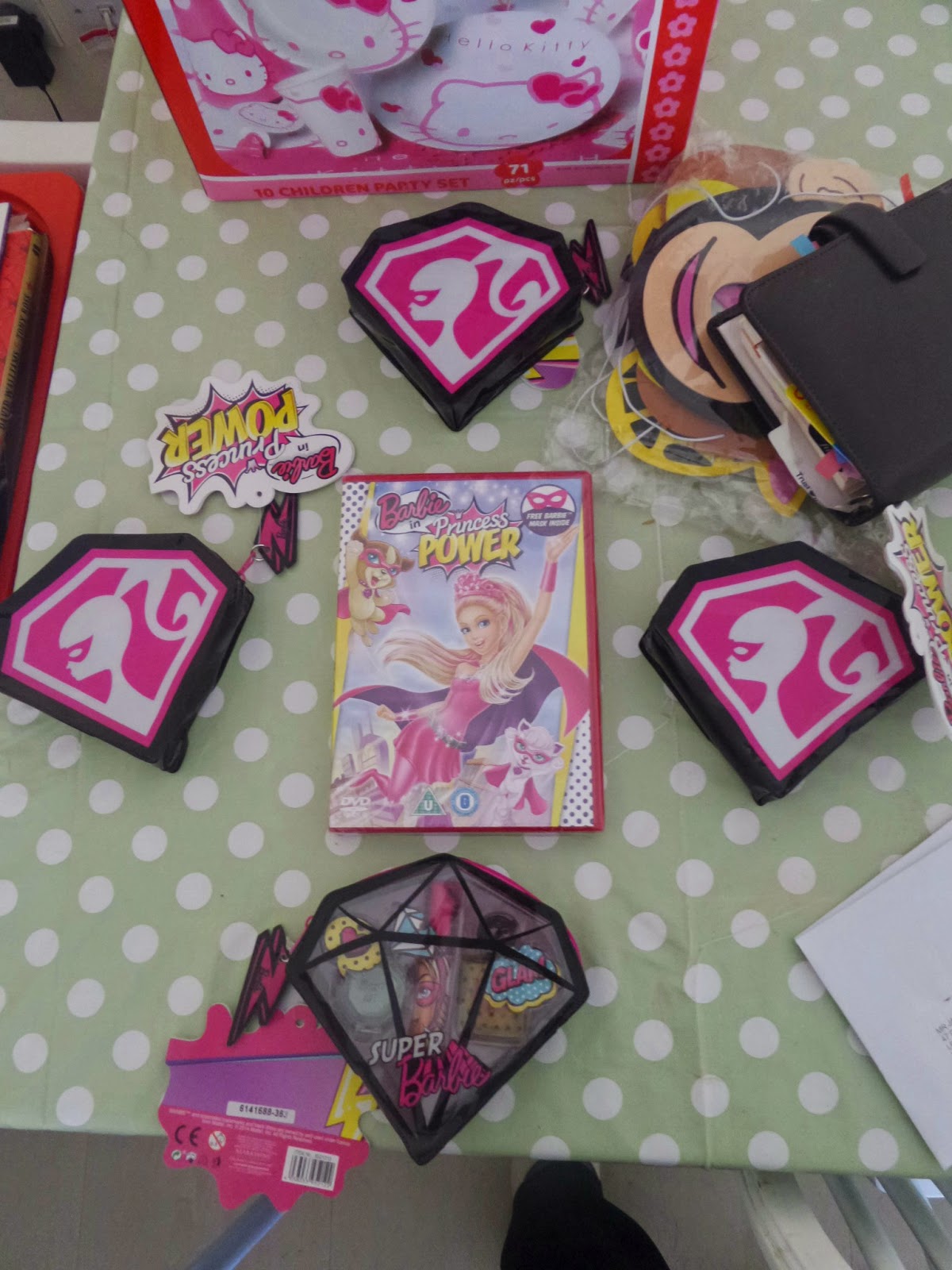 Top Ender invited her friend round on the weekend, unfortunately her friend arrived whilst I was out shopping and so I didn't get photographs of them watching the movie on Top Ender's Day Bed. The girls however assured me that they had had a laugh watching the movie and didn't spend the entire time texting each other or sending messages despite sitting next to each other... I somehow don't believe them! The girls then unpacked the Dolls that Mattel had sent over and spent time together playing in the garden, acting out various scenes from the film and other things that popped into their heads. They had a blast, at least I'm guessing they did because they were laughing their heads off in the garden.

Now, we've been talking a fair bit about Super Heroes in our house, because the topic last term for both children was about Super Heroes and one day BB had to write homework on a hero in his family. All I'm going to say about this piece of work, is that BB obviously does not get his modesty from me. 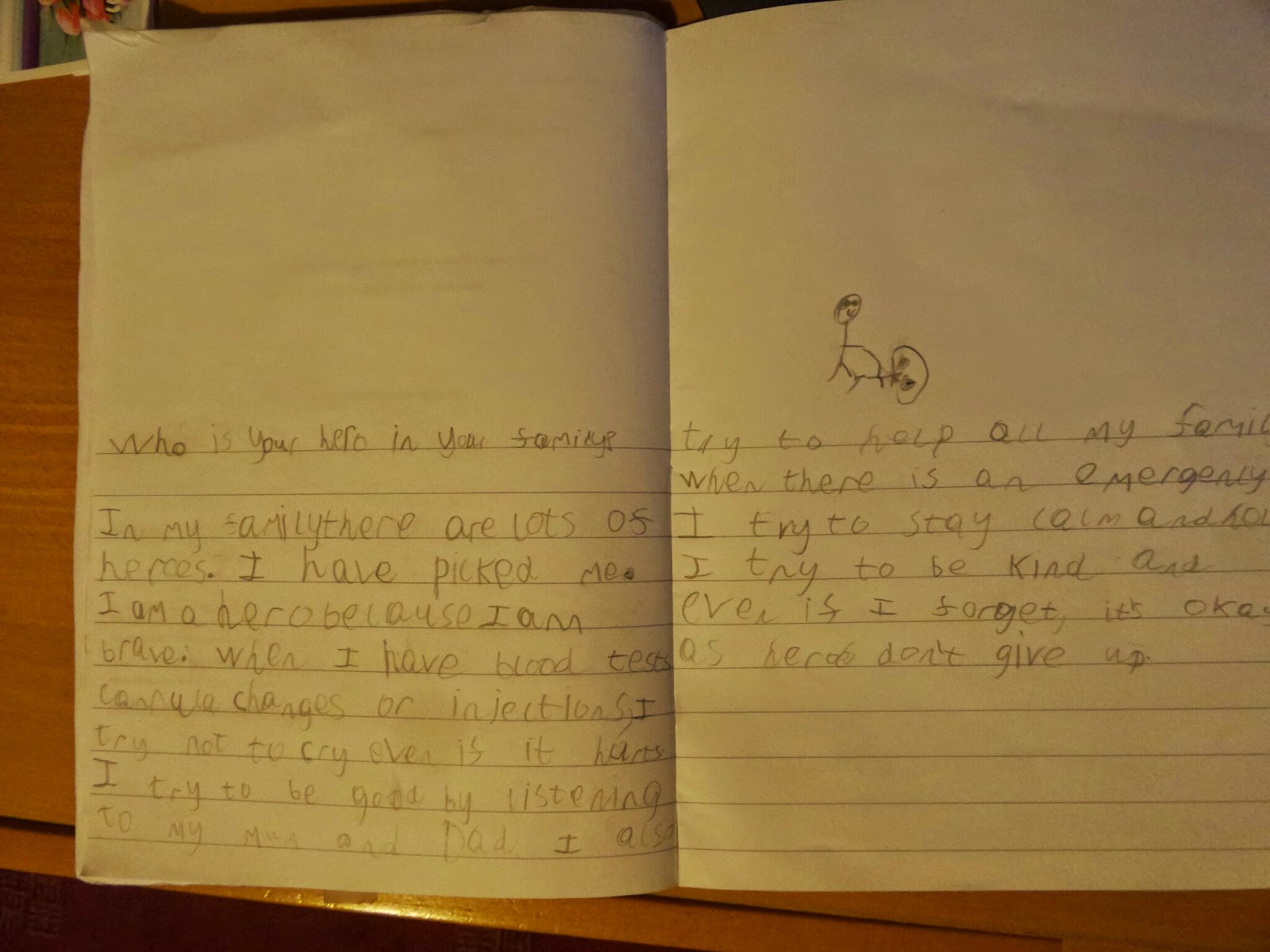 The thing is, he's right. He is a hero, as is Top Ender and hopefully Daddy and I. We all have the ability to be a hero and I don't know about you but I'm going to try and be a superhero my whole life through.

We were sent the Dolls, DVD and Make Up bits by Mattel.
Family Life Toys