See, the fresh Tuna got accidentally put into the freezer and so we ended up having Fish Finger Sandwiches for our meal on Tuesday and then on Thursday the Children had a HotPot that my Mum had got for them from the day before and so I had the Tuna Friday whilst the rest of the family had Sausages. 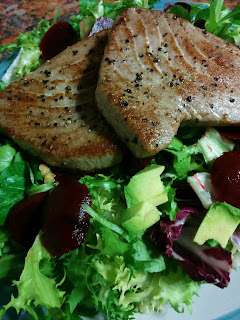 It worked out okay!

Again, another check of the blood sugars for BB.

As I know that Top Ender will moan because she apparently hates Salad (despite being happy enough to tuck in at times), I'll do some rice for her and Daddy and they can eat together at the table and BB and I shall eat together at the little tables on the sofa.


Daddy really wants a roast, he suggested a Bernard Matthews Roast and then Sausages, but neither were something I was hankering after and so I decided to go with something a little more to my tastes and decided I would like to have Roast Beef!

Luckily Daddy agreed, so we're both very much looking forward to that and hoping that the Children will agree.


BB has a friend coming round to play today, so I'm going to make them Pizza. Almost every child I've ever met loves Pizza.

Plus, it'll allow Tops and I to eat in the Kitchen leaning on the central table rather than having to listen to more Boy talk than we have to!


I'm planning on making something a bit "special". See, I'm working on a plan for next month where I'm going to serve fish everyday.

Daddy is going kill me.

Anyway, I figured that if I made something nice this month for him, he might go along with my crazy plan for February.

He's going to kill me isn't he?

Wednesday - Meal With My Mum


The Fish Goujons are made of Sea Bass, and are made by Whitby. We did a review of them last October and we've had some a few times. The Children really love these, so I've picked some more up from the Supermarket.

I'm going to serve them in a bun with some Salad and lemon mayo. I'm going to also do a side picky finger dish of Cucumber and Carrot sticks, unless I can be bothered to make Sweet Potato Fries in which case I'll swap out the veg sticks for fries!


It's Daddy's birthday this Sunday coming and he decided that he would really like a Take Away Curry for his birthday meal. The problem of course is that with his birthday being a Sunday, we didn't want to order one in and so Daddy has decided he gets it tonight!

I have a feeling that BB is not going to be interested in having a Curry and so I'm planning on him having some chicken with take away rice.


So, what are you eating this week?
Food Main Meal Meal Plan