- February 03, 2016
Every week at Church, after the Sacrament service has finished, I go to the primary end of the building. This is where the Children go after the service for their Sunday School lessons and I'm lucky enough to get to teach them during Sharing Time, and sing with them during Singing Time and just generally hang out with them.. although I'm sure really I'm supposed to be setting a positive example not one of I'm just a big kid!

Every week without fail I tell at least three Children to stop rocking back on their chair and I'm sure there are three times as many who I either don't see, or who stop rocking because I've told one of the others to stop!

It drives me crazy and always has done.


Not because of the story a teacher once told me and my class about a boy that did it, who then slipped and cracked his head on a radiator and died. Or the one about the kid that did it and bit clean through their tongue. Or the one who did it and broke their teeth. Or any of the other countless other stories that I'm pretty sure never happened, but were just used to frighten students into sitting still and not rocking back on their chair.

It drives me crazy because I DID see one kid hurt themselves rocking back on their chair. They cut their face open and there was blood and it was terrible.

Several months ago, Top Ender and Big Boy were given a Don't Lean Back chair each. Chairs which, in my very humble opinion EVERY School should spend the extra money on. 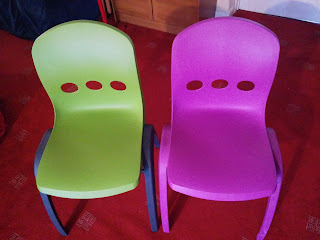 Well, they are designed very simply to make it difficult to lean back on. I say difficult because I did catch Top Ender leaning back on her chair and almost fall down the back of her bed like she did once when she had a mid sleeper!

A quick telling off and she hasn't dared try it again.

I was quite glad when we'd been given the chairs, as I was looking for good chairs for Tops and BB to have because now that Tops is in Senior School, I figured she was going to be getting more homework and need a good seat to sit on.

The DLB chairs are funky colours and also a great looking design too.

BB's chair has spent a lot of time the living room, where adults, children, teenagers and cats have sat on it and everyone has loved it, saying how comfy it is and how stable it feels!

It's been in the Living room because BB loves using it as his chair when he plays computer games and I have to admit that knowing he is sitting up properly does give me some peace of mind over the amount of time I allow him to play! 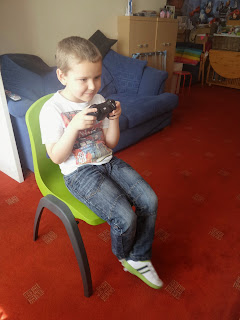 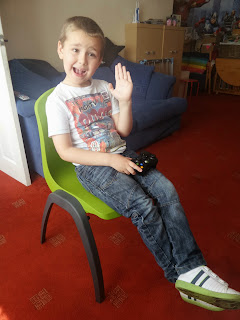 So. In short, these chairs are fab because they are encouraging the Children to sit up straight, not to rock on their chairs and most importantly they are making my living room look FUNKY!

You can buy the chairs from Dwell for £69. We received two of them from the guys at DLB.
Family Life Home Improvements Making A House A Home Review