- February 02, 2016
Every so often I share on Facebook, short tales of funny moments that have happened in my life.

I apparently live in a British Sitcom.

These things are things that do not warrant a full blog post, but I've decided that I'll collect them together in a blog post and post once every few months so that we'll never forget these stories which make us laugh so much and hopefully will make you laugh too! 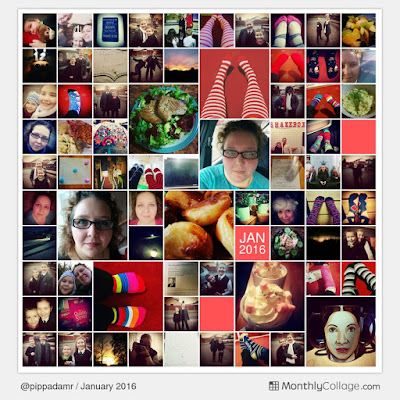 Big Boy was feeling a little obstructed and so he was off to sit in the bathroom for a bit to help see if he could move things along.

I knew that he could be in there for a while, so suggested he might want to take his Tablet with him. He could set it up on the clothes hamper and continue to watch his Video.

"No thanks Mum, I don't want to be distracted from doing a poo!"

Big Boy had a fever and was a little delirious. Daddy and I were taking it in turns to check on him through the night, administer medicine as needed, check blood sugars and try to keep him cool.


Daddy went into BB around 3am, to do a blood test. BB "woke up" and told Daddy he was really thirsty and grabbed the blood test monitor from Daddy.

BB then tried to pull the top of the monitor off so that he could drink from what he thought was a bottle. Eventually Daddy managed to get him to let go of the monitor and to drink from the actual bottle of water.

Again, Whilst BB was ill, he had fallen asleep on my lap on the sofa. He was so tired, we didn't want to disturb him so Daddy got a snack (a bowl of Beefy Ball Crisps from Poundland and they are well lush) for me to eat whilst I was trapped.

BB "woke up" and asked for me to hug him really hard, so he couldn't breathe. I obliged (although I didn't hug him that hard, I like my children to breathe) and he settled back down.

A few seconds passed when BB suddenly realised I wasn't hugging him so he threw his arms up in the air, catching my snack and launching them in the air.

All Daddy could hear from the Den, was the sound of little thuds on the carpet as BB and I were surrounded by falling mini beef bombs.

Big Boy came to Church with Top Ender and I. It happened to be a day where the Teacher of BB's Primary Class was away, so I was taking his lesson.

The Lesson was talking about encouraging Children to do the right. Part of the lesson, had a story where some boys were going to break some birds eggs. At home I had hard boiled some eggs and created a nest as a visual for the Children during the story.

The Children were amazed at the eggs and the nest, and each Child wanted to hold the eggs. They took it in turns, being very careful with the eggs (I hadn't let on they were hard boiled) until it was BB's turn to hold an egg.

He very delicately picked the egg up from the Child sitting next to him. Carefully examined it and then went to put it back in the nest.

Where he simply forgot it was an egg and tossed it.

All of the Children sat wide eyed in horror at what had happened, including BB.

I explained it was okay, that the eggs were just going to be my lunch so there was no harm done and continued with the lesson.

Almost a week later, I was taking BB to Beavers. He was sat in the back of the car and just suddenly started laughing his head off.

Eventually he managed to get out "I threw the eggs down! I'll remember that forever!"

Daddy has this habit of saying Hello to me every time he comes into the room. It has started to rub off on me apparently...

Daddy was in the Kitchen, making some lunch for the Children. He was putting some bread rolls in the microwave, as we have cats who will eat anything that is left on the side.

Seriously I mean anything, they ate Top Ender's Malteser bar the other week and the week before that I couldn't find a tomato I'd cut ready to put in a salad! The cats had eaten it!

Anyway. As I was walking into the Kitchen I said "Hello" to Daddy.

Daddy spun round and started hitting me on the arm with the bag of bread rolls, with a look of wild panic in his eyes, which quickly turned to relief as he realised it was me...

Turns out that my saying Hello had freaked him out into thinking there was a demonic severed head in the microwave (with the ability to talk still) talking to him so he went full bats in the belfry crazy to get the evil creature now walking into his Kitchen.


The Children obviously think this was hilarious and keep saying "Hello" any time anyone opens any kind of door now.


Daddy is not so amused.


Just before Christmas, Daddy accidentally purchased a Tartan Bonnet and Ginger Wig. (It's a long story that isn't very funny). I said to BB he should go and shout "Come On Murray!" wearing said Wig in the living room, where Daddy was currently watching the match.

BB said he only would if I paid him, so I told him I had 40p in my wallet that he was welcome to.

BB took time to adjust the hat and wig in the mirror just outside the living room door. Daddy could hear him and so stuck his head round the door, to find out what was going on.

"Sssssh! Go Away!" said BB through gritted teeth to his Daddy. "This is getting me 40p!"


Top Ender had just gone upstairs to her bedroom to do some homework, when I yelled up the stairs;

"Tops, can you check the laundry basket at the top of the stairs to see if there is anything in it please?!
"No!" replied Top Ender.
"No there isn't, or no you won't?" I questioned
"I'll never tell!" Top Ender cheekily replied


BB was sent home from School as he was poorly. I set him up on the Sofa, with a Teddy, a blanket, a pillow and gave him the remote control to the TV. About two hours later the following conversation occurred.

Predictably I went and got his Tablet and his 3DS within the next few minutes.

It was the sighing that got me.

Daddy left this for me to discover one morning. 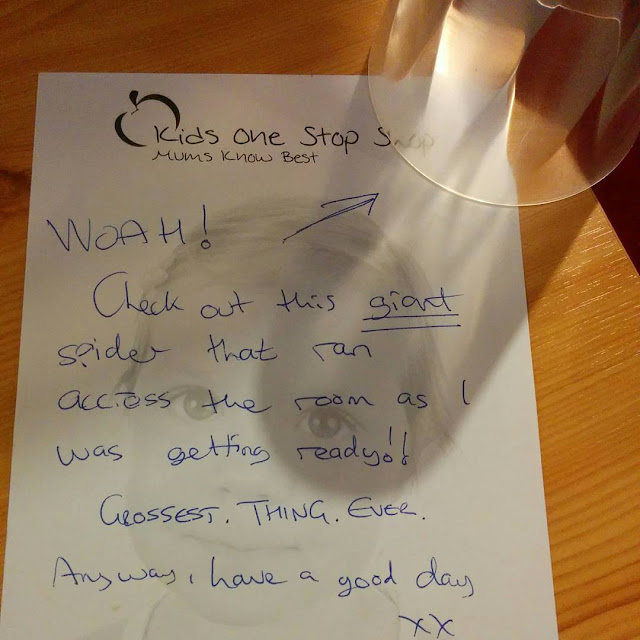 It's a good job I'm not scared of Spiders isn't it!

So those are the funny moments that I can remember from January. Did anything funny happen in your house last month?