A Mothers Ramblings is the true story of an ordinary British family that likes to have fun. We don't mean to be funny, but quite often find ourselves having conversations or in situations that wouldn't be out of place in a Classic British sitcom. We love to travel, visit attractions and are quite often found in the kitchen at parties talking to the owner's pets. 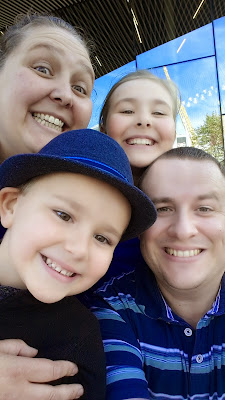 
The blog is written mainly by me, PippaD, aka Mummy, Mum, Crazy Cat Lady and a host of other names too! My favourite has to be MUM! though. Oh wait, not that's just the one used most often. Good job I do love it!

I'm not your typical British Mummy Blogger. I mean I do cook, clean, garden, play with the children and write this blog, but I also spend my free time staring out the window putting off doing the cooking, cleaning, gardening and working out if watching TV counts as playing with the children...

I'm well known for my love of socks, somewhat creative lunches, for asking very random questions, playing hide and seek in the supermarket with my Mum, for having fun and my devotion to Dr Pepper. If I'm not on a fun day out with the Family, then you will find me working and causing trouble at a local senior school, being a Brown Owl for a local Brownie Unit, a Bear at the local Rainbows, at Church with the Youth, ferrying Top Ender or Dan Jon Jr to their extra curricular activities, going on long walks, exercising whilst trying to watch Netflix or trying to sort out the junk drawer... which thanks to Marie Kondo I'm actually doing really well at!

I'm a member of The Church of Jesus Christ of Latter-day Saints and I'm currently enjoying my time as the ward Young Women's President. I promise I will learn the theme by heart before I am released.

You can also find me at Pippa World where I blog about my weight loss journey, but don't hold your breath for regular updates, I like food far too much for anything as trivial as losing weight and quite often forget to update the blog!

Flyfour is the head of the household and every so often on Twitter and of course, the children most often call him Daddy, Dad or DAD!

His twitter stream includes pictures of what he and the family are up to, the funny things he sees or finds funny on Twitter, his love of gaming, images of Gluten-free Food and he lets his inner grump out too.

Flyfour occasionally writes blog posts, is in charge of the 3D projector, makes a great Gluten-free Apple Crumble and is slowly automating the house.

There is nothing that Flyfour likes better than watching Only Connect in bed, making the perfect Gluten-free Scone or turning the house into an automated wonder. He also likes flying Drones, watching Michael McIntyre, shouting RHLSTP and bemoaning that he gets all the rubbish snacks because of his being a Coeliac.

Top Ender is occasionally on Twitter and Instagram but more than likely she is online playing a game (she's a mod on several servers) practising her Ukulele, Guitar or singing various songs from Musicals or performers I've never heard of before.

Top Ender's biggest ambition was to own a sweet shop, whilst holding down a full-time career as a Fashion Designer/Model/Pop Star/Best Selling Author/Dancer/TV Star. She has had further thoughts about being a Costume Designer, an Author, an Air Traffic Controller, an accountant and even a film journalist but she is now sure that whatever she does in life for work she'll be happy and that's all that is important anyway.
Knowing how determined Top Ender is she'll probably manage everything on the list before she's twenty, be insanely happy and go on to rule the world.

Top Ender was diagnosed with ASD, Tourettes, Anxiety and OCD in 2018, read the series of posts about the diagnosis process to find out more.


Dan Jon Jr is Twelve and likes everything, even more so, if it is Green Red Blue a computer game! You can normally find him, in his room playing a console game or upside down and reading a book, but really thinking about computer games or his latest Netflix binge.

Dan Jon Jr is really creative and spends a lot of time making his own books and comics, drawing pictures and creating videos to go on Youtube or putting selfies on Instagram. Dan Jon Jr hopes to make it big one day in programming and has promised his Sister that she can design the company uniform and the clothes of any characters he creates in his games... then again he also promised his Dad that he'd buy him a helicopter for Christmas!

Dan Jon Jr was diagnosed as being a Type 1 Diabetic on Friday the 13th July 2012. That was certainly a day we will never forget and you can read about it here. Dan Jon has been on an Insulin Pump since 13th February 2014, but it doesn't stop him eating sweets, having fun or trying to scoot down the hill in front of the house without using his breaks!

If you are so inclined, you can check him out on Twitter and yes, you are right, you aren't losing your mind he has been called both Baby Boy and Big Boy in the past here on A Mother's Ramblings!