- November 26, 2014
Last weekend, Daddy, the children and I headed up to Birmingham to visit Cadbury World again. 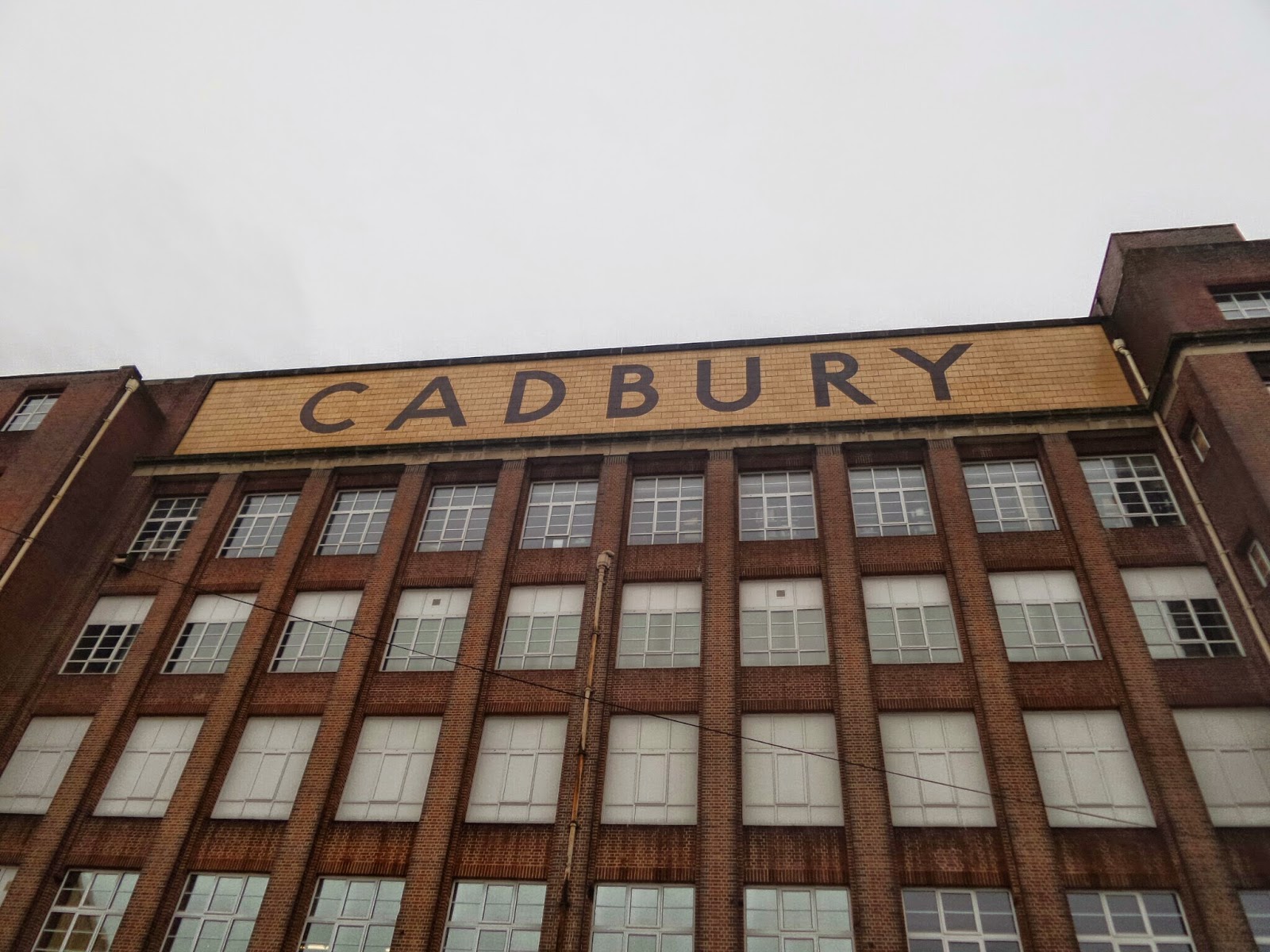 Now, last time we went I had said that I didn't think that the tour itself was very child friendly, and at the end of it we were all craving vegetables and protein (in the form of Chicken drumsticks) and not eager to get away, but basically we were wanting to not be thinking about chocolate for a while! However, we thought we needed to be fair, we would go and pretend we'd not been before. We would pretend this was entirely new to us and seeing as Santa wasn't there the last time, we thought that maybe he'd sprinkle some magic dust and help us. Plus this was a special blogger day.

We arrived at Cadbury World quite early, a little confusion between Daddy and I over what time we were supposed to get there (We were to arrive for 9:30am, so I said 9:15am to give us some time incase of having to stop or something and Daddy decided 9am for the same reason, thinking that 9:15 was the firm deadline!), no traffic and all the lights seeming to be in our favour, meant that we pulled up outside the front door and had our pick of parking spaces. I would totally recommend getting there early if you can, that way all the stress is left behind and you can enjoy your day.We met up with the rest of our group, and before we went to visit Santa spent some time in the Cadbury Cafe, again if you have time do stop off as it has a lovely atmosphere. 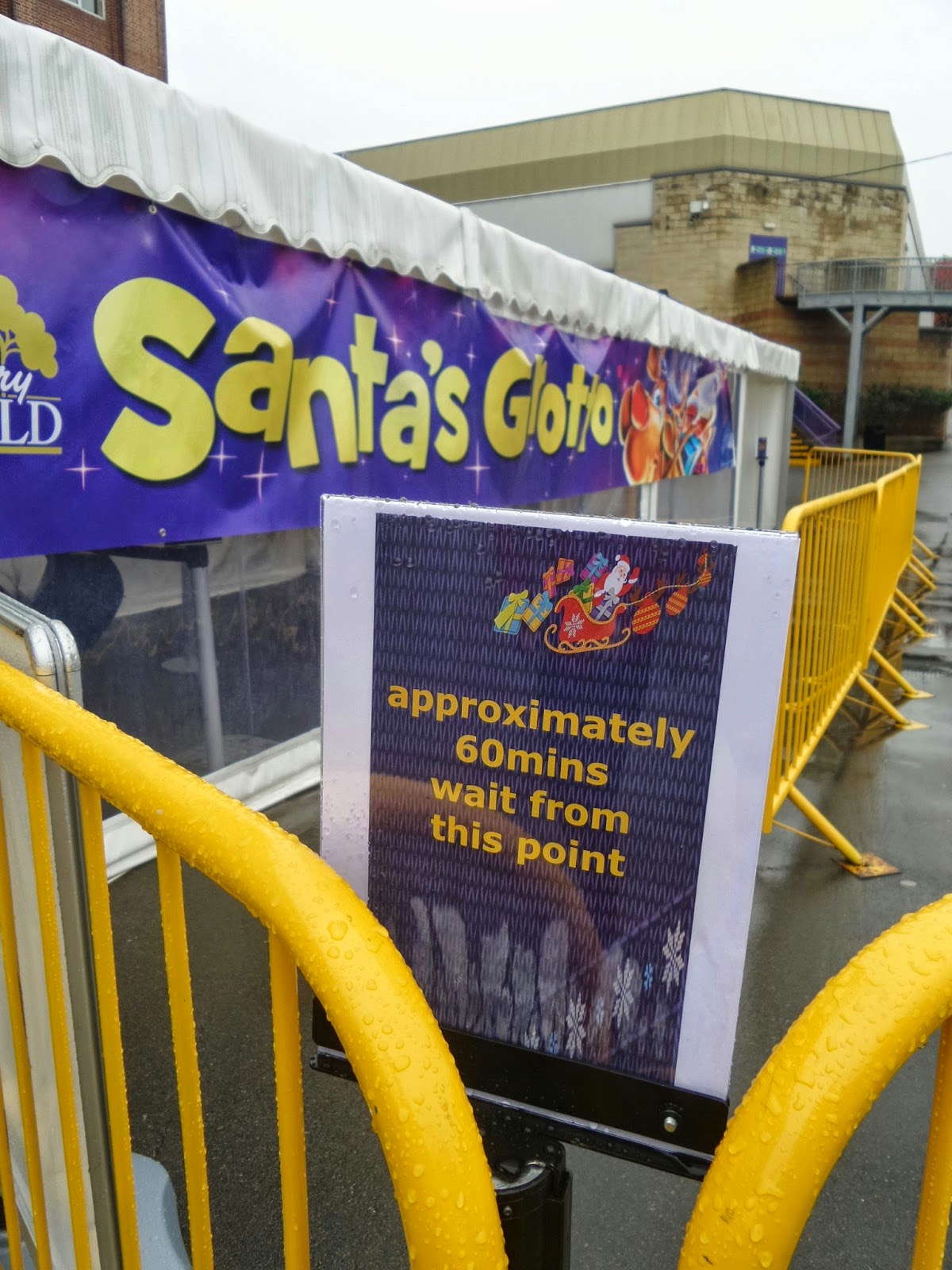 Seeing Santa was great, and the slight Brummie accent just added to his warmth. Santa knew that I'd spoken with Top Ender and Big Boy's teachers this last week and even managed to remember some things about the children that I'd forgotten about! The children then had their photograph taken with Santa (Daddy and I declined to be in the shot) and Santa gave them a Cadbury themed gift (Pencil set) before High Fiving Daddy and the children and giving me a very polite hand kiss. 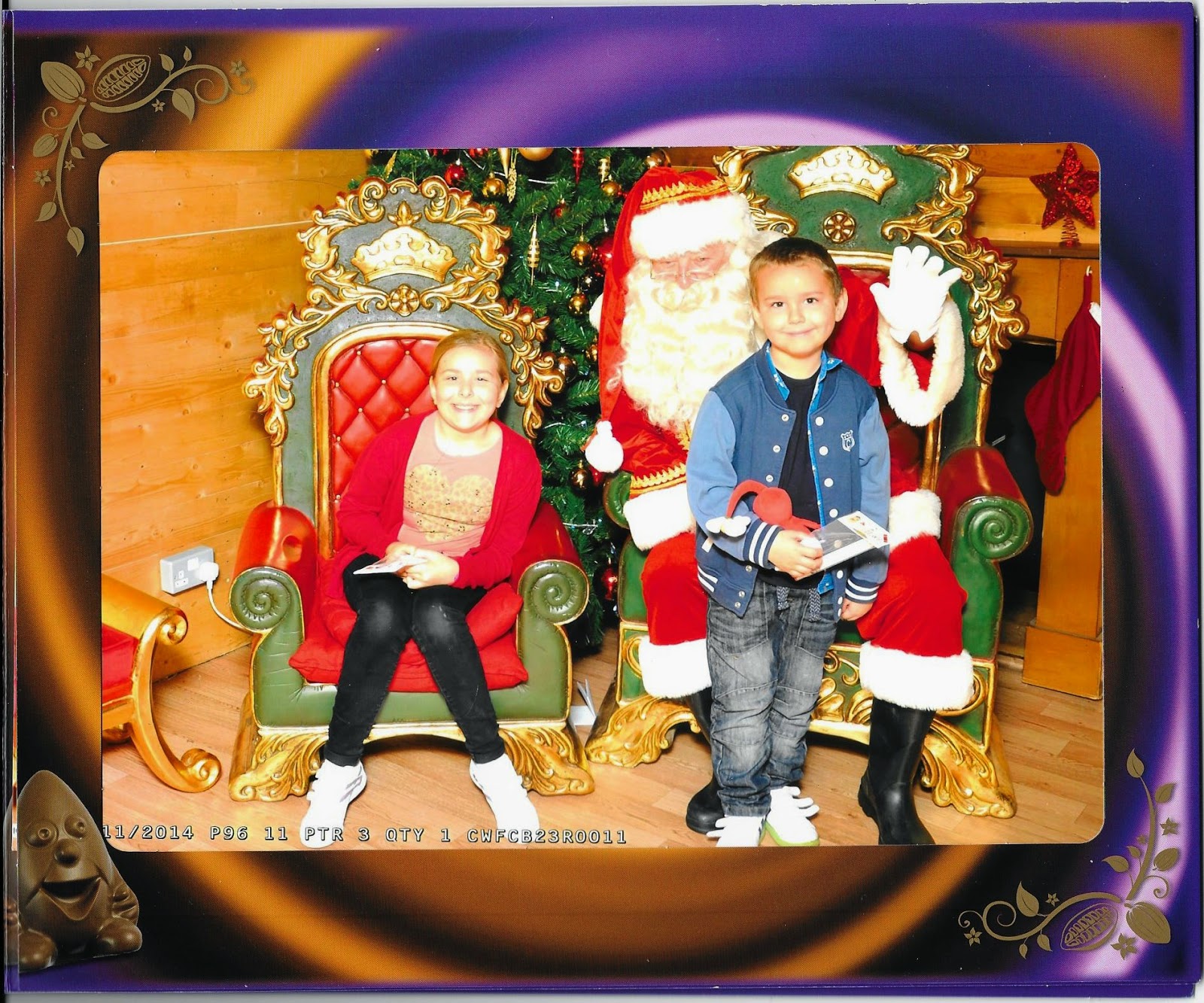 We then went to visit the new 4D attraction, which saw Big Boy holding my hand as he was a little worried but soon had him giggling with delight as we were whipped through the Cadbury factory, jumped into a massive vat of Chocolate and achieve a long time goal of mine, got to ride the Cadbury Crunchie rollercoaster! The 4D attraction is certainly more fun, than the attraction that was there previously, and a little more fair as it doesn't matter where you sit, where as it did matter where you were stood before! 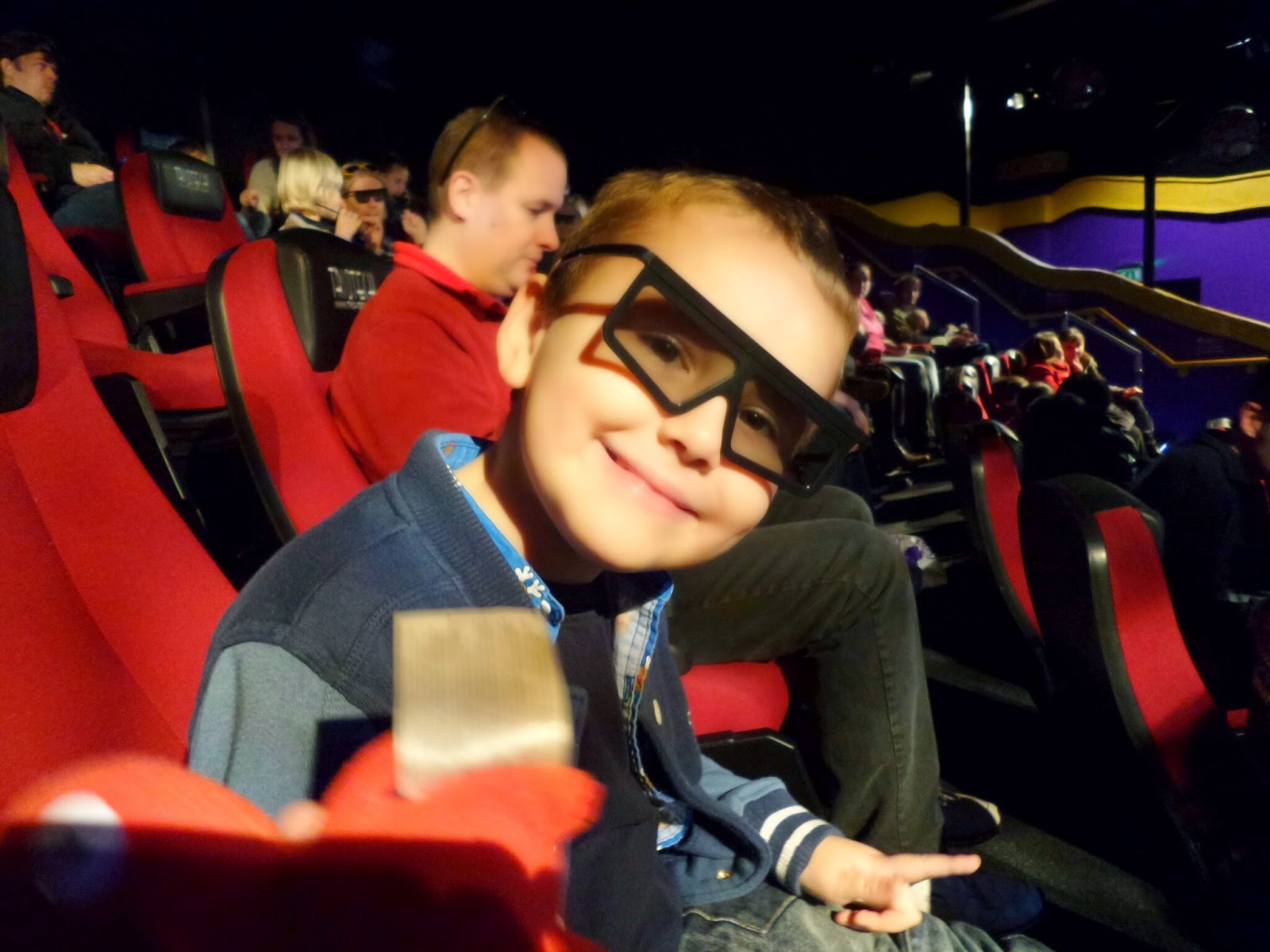 We had a spot of lunch in the cafe (technically it was brunch) and the Cafe sells Gluten Free food, which was brilliant. Daddy almost forgot to take a photograph, but as you can see they didn't exactly skimp on the portion sizes. 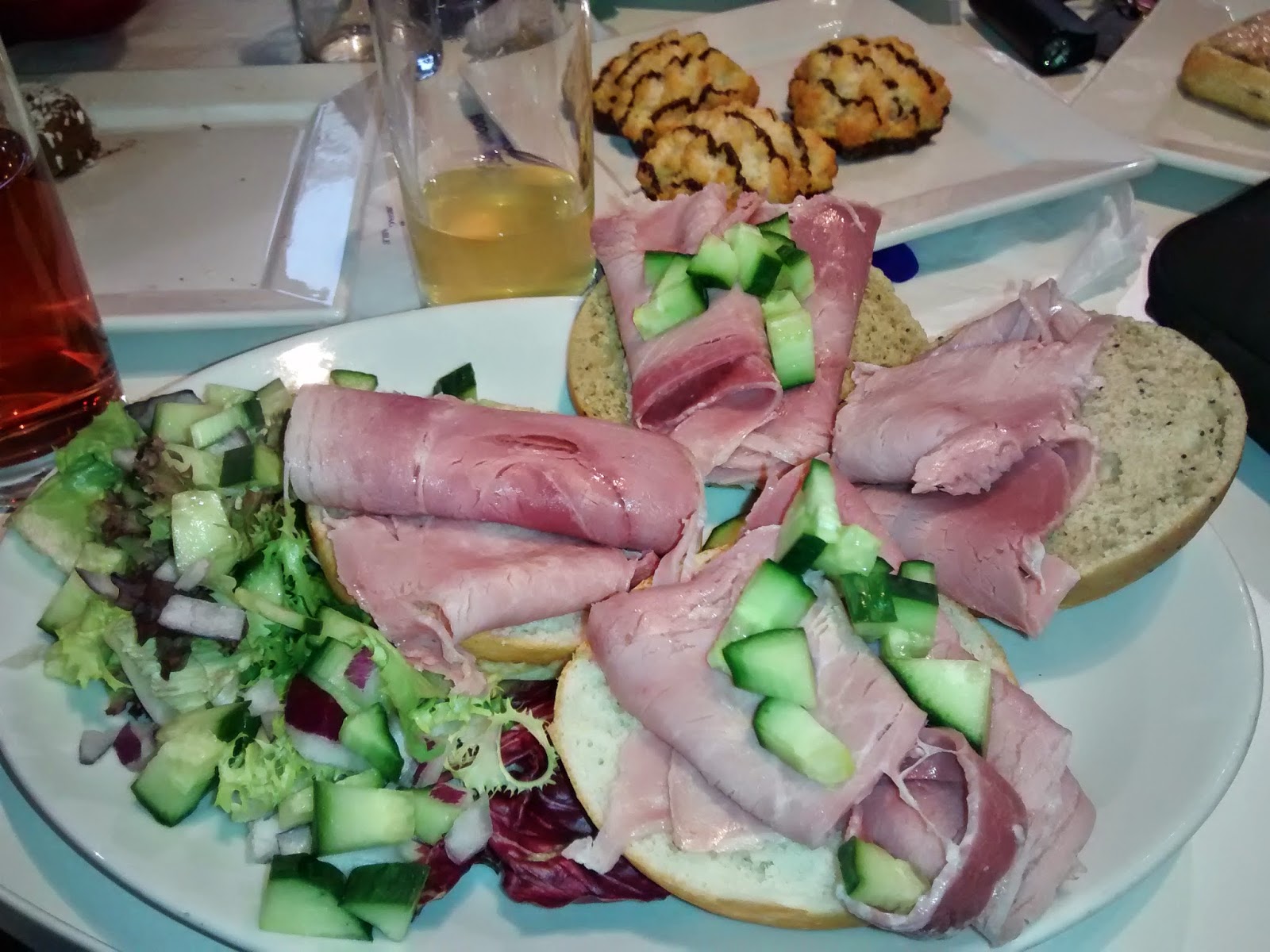 We headed off to the Panto, after lunch/brunch and it was actually quite good. It took the audience a little while to warm up, but when they did it was fab. We were lucky enough, to meet the cast afterwards and they were fabulously fun, not dropping character and really making the children and Daddy and I laugh. 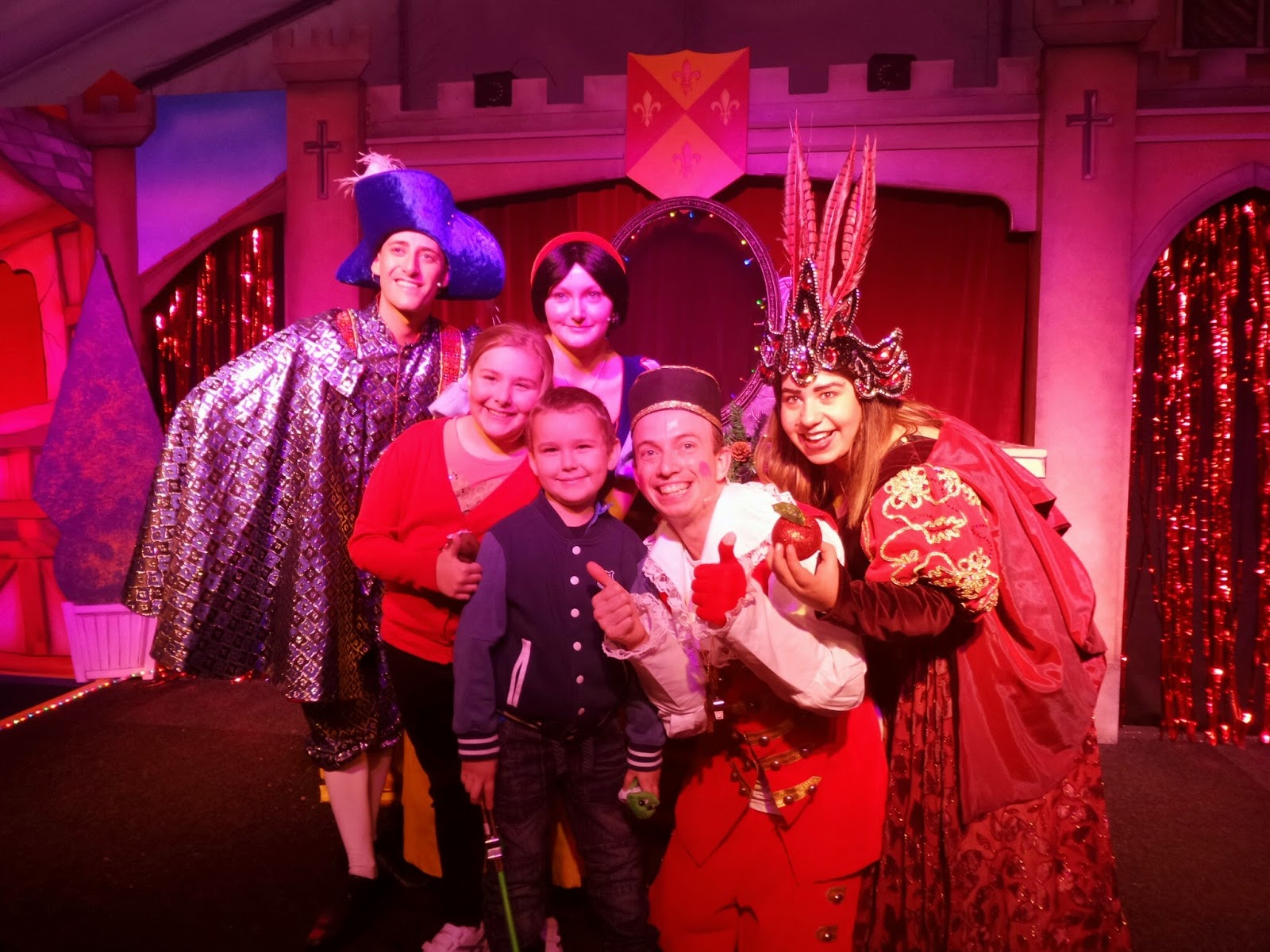 The tour, was what followed next for us and I'm not ashamed to say that we kinda rushed through it. It's the same as last time, there wasn't exactly a lot going on and again I do think they need to make it a little more child friendly. Of course we did that ourselves, by asking the children to read signs and to tell us what they could see, but the production line was down again, and watching staff members sit on chairs isn't all that interesting. I would show you a photo, but you aren't supposed to take photographs in the factory, so I can't.

One thing that I didn't know, until this last visit was that visitors who are unable to consume milk don't lose out when visiting. They too can collect all the chocolate as they go round (Four bars per person in the party) and at the end they can explain they can't consume milk and can be given a voucher in exchange to use in the shop. I thought that was a nice idea and just goes to show along with the gluten free food they have in their cafe that they really are being inclusive.

This time, our family day out was pretty fantastic. I think that it helped that we were directed to do the attractions in a certain order (Santa, 4 D Experience, Eat, Panto, Tour) as it made everything fit together and made sense as the queues were shorter in that order, but this time we came away really feeling the Cadbury love and I could quite easily be tempted back in the not too distant future.

We were invited up to experience a Cadbury Christmas, as such our admission was free.
Christmas Family Life Paid Day Out Review