There were only one thing that Dan Jon Jr was interested in. 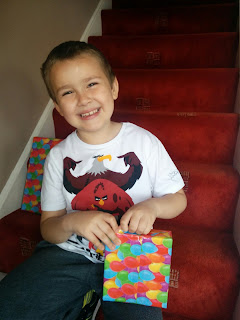 Having his own debit card.

We're Osper fans here, with Top Ender having had a card for a couple of years and when we asked about Dan Jon having a card, they said they'd send it out early so he could register it on his birthday, that's how lovely they are!

Since the start of the year, Dan Jon has been saving up his pocket money, ready to put on to his card, ready for him to use in a store and get given the same look as Top Ender got every time she used her Osper debit card. You know the look, the "Are you old enough to have a card?!" to which he would reply in his best Phineas impression; "Yes, Yes I am."

Dan Jon woke up at 6am on his birthday. Luckily, due to Flyfour and I being early risers we were ready for the day ourselves, but also we had been up pretty late the night before watching Eurovision and so we were a little tired. Somehow I drew the short straw and so I took Dan Jon downstairs and we sat curled up on the Sofa and played a game of Bloons Tower Battle and watching a few cartoons together.

An hour later and Dan Jon couldn't wait any longer, so we piled back up into my bed, woke up Top Ender and celebrated as we opened Dan Jon Jr's birthday gifts. A mixture of new Tech, toys and bed linen had Dan Jon feeling like a king and he lay on my bed whilst his feast of a breakfast was prepared. After breakfast, Top Ender and I headed off to Church whilst Dan Jon Jr and Flyfour stayed at home, where Dan Jon started playing with his Lego and creating some marvellous pieces to play with.

After a light lunch and an afternoon of visitors, we sat down to an evening meal of Lasagne and Onion Rings and a bit of cake. We had a great giggle just chatting to each other and then Dan Jon asked if we could play a game together.

Dan Jon looked in the cupboard and pulled out Dobble.

We sat and played for a good 45 minutes with so much hilarity between the four of us, I was convinced that the neighbours were going to call the police over the amount of noise we were making. Eventually however we were all giggled out and we moved onto playing Happy Families (yes again, we love Happy Families at the moment!) where the table was almost turned over Monopoly style (you know because someone got in a strop because they were losing) before we all headed off to bed (it had been a long day!)

I have to say I think that Dan Jon Jr's 8th Birthday was one of the best birthdays we've all shared.
Birthdays Family Life