Our Halloween And A Giant Ferrero Rocher!

- November 03, 2017
Halloween may have been and gone, but I wanted to share a few pictures from the night of what my little family of four got up to, so I hope you'll all indulge me!

As has become tradition, we headed off to the Trunk N Treat at our Church building. The rules for our little get together are simple, no masks, not too much gore and keep the costumes modest to be inline with our values. The children and I had decided to get there early to drop off our Slow Cooker pots of Veggie chilli and help out with various jobs that always need to be done, but somehow the lady who was in charge of organising it this year was all done. I think she really is Super Woman in disguise! 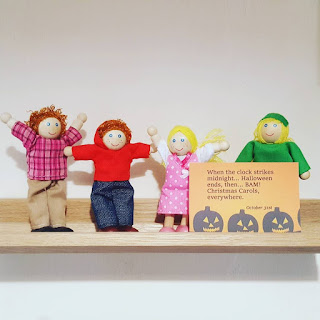 Instead, we supported the Missionaries and one young man who turned up to help remove the leaves from the car park (the other young men seemed to forget to arrive early to help!) and by support, I mean we stood around making small talk with the other adults and generally got in the way. I believe it's called "Supervising"...

Dan Jon Jr decided that this year he would like to be a character from The Escapists 2. It's a computer game, where you're a prisoner and you have to escape from Prison and the few times I've played it? Well, let's just say there is a reason I stick to games on my mobile phone. 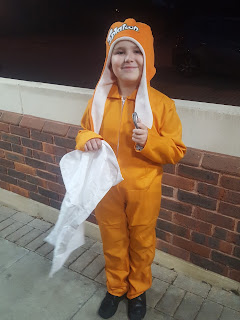 Top Ender decided that this year she would like to be Little Red Riding Hood. Now, I'm not saying anything, because I don't want to give the game away for something else that is happening in our lives, but remember this for in a few weeks time! 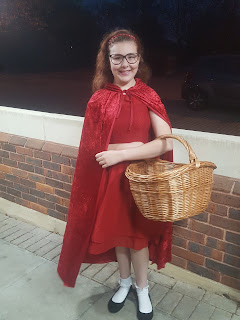 I decided that I would be Medusa. Now, if you have followed my blog for some time or know me in real life you will know that I am PETRIFIED of snakes. Why would I pick Medusa as my costume? Well, some thought it was some form of therapy, some thought I was just really trying to ham up the whole petrified story to win the costume contest (there wasn't this year, but one of the young men would have won, he was dressed as Carl Fredricksen (the old man) from Up and looked brilliant!) and some just thought I was plain weird. 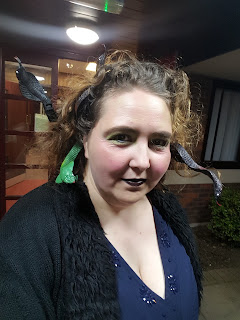 In actual fact, the reason I picked Medusa was that I knew my family wouldn't believe that I was dressed as her, or that I would willingly put snakes in my hair (even if they were plastic). The best part was when driving to the Chapel I had to make a stop to get Petrol. The cashier didn't even blink as he served me, although I did get a double take from a lorry driver who was also filling his tank. 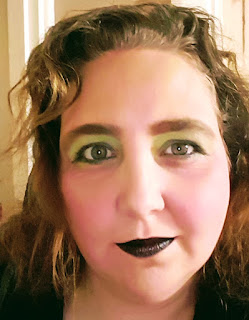 The main attraction, of course, was what were we decorating our boot as?

I'd been teasing some friends (we joke they are our only competition but it's not true, it's just they won last year and we'd won the year before) that our design this year was all high tech and that we'd come up with the ideas last Halloween and had been working on it ever since, but in reality, we'd built it the Sunday before (we had had the idea last Halloween however) and I finished it off about thirty minutes before we'd arrived at the Chapel!

Our design this year was a Magic Mirror on a wall. 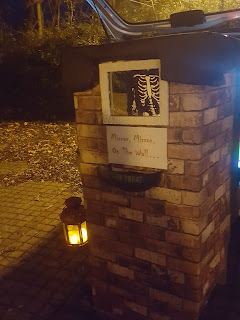 I'll write another post, telling you how to make one as I did manage to take a few snaps as we built it and Flyfour sent me a few shots of the bits he did whilst I went to Church and it was stupidly simple and thesort of thing that you will want to recreate in the future for your own Trunk N Treats. 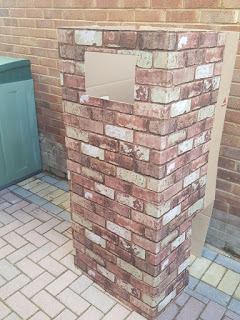 It was hilarious and one of the Trick or Treaters who was walking around (and a friend of ours) decided to Scream at the mirror and when the mirror screamed back... well let's just say this particular young man jumped rather high and could have had an unfortunate accident if his bladder wasn't already empty! 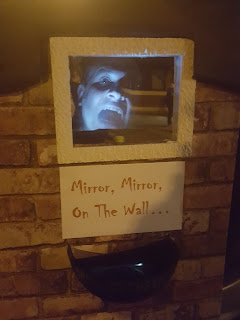 There were so many little moments of hilarity, Flyfour (who was in the mirror) asked several of the Trick or Treaters to perform for him. So they did, some sang, some told jokes, some danced and then Flyfour would rate them, I think all the dancers received a "Severnnnnnnnnnnn!" to much amusement.

A few of the parents and older trick or treaters were amazed by the idea and the questions the Mirror was asked ranged from the normal to the outright wacky. Luckily Flyfour was well into it and gave everyone a giggle, or a scare or for those little ones who the idea was just too scary for, a compliment. 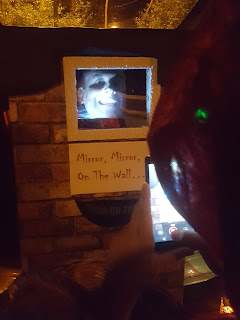 Normally, I have no idea who is judging the trunks but this year our Bishop was and I managed to persuade him that he had to ask the Mirror a question. He asked the true question to ask a Magic Mirror, "Magic Mirror on the Wall, Am I the Handsomest of all?" to which the Mirror replied, "If you take off that mask, I'll tell you."

Luckily the Bishop thought this was hilarious, although when he retold this story when presenting the prizes I was sitting next to both his wife and his Mum and she wasn't amused! I assume she was joking, but I'm not really sure...

Anyway, it turned out that we won! Flyfour and I both thought that our friends that had won last year should have won as their car was excellent and that Bishop had given us a pity win because of my recent sad news, however, the prize was a Giant Ferrero Rocher and there is no way I'm giving that up so I'm taking the win! 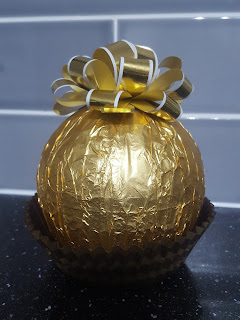 So, that's what we got up to and if our friends/competition are reading this be warned because next year we have an idea that is going to truly blow your socks off!
Autumn Craft Family Life Food Free Days Out Funny Halloween Religion