- November 06, 2017
If you look at me and my Mum, you can see we are related, even if she thinks I look more like my Paternal Grandfather than her. 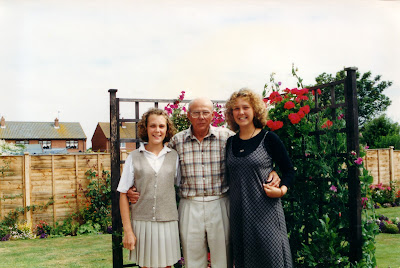 My Mum and I have the same eyes, chin, evil glare at people who've annoyed us... You'd have to look a bit more deeply to see my Dad in me.

And then there was the phone call saying that my Dad had died.

My Mum called my mobile because Flyfour and I had gone out for a walk. She couldn't tell me the news, she knows how badly I deal with my grief. Instead, my poor husband had to break the news to me. How do you tell someone you love, something that is going to hurt them? There is no fancy way of saying someone whom you haven't spoken to for years but deep down you love, has died.

I was walking alongside Flyfour, traffic was driving past, planes flying overhead. We had been joking just moments before, it was a perfect day.

And then it all stopped.

I can't fully explain that moment, the moment where my brain and heart understood what he had said, but I feel I need to try, if only for the fact that now a week later, this writing is helping me to let the emotions out. I could feel my heartbeat, hear my breathing. Suddenly I broke. I collapsed into Flyfour, his arms enveloping me into a circle of love, that allowed my grief, my pain to flood out.

And then in just a few seconds, it was over and I continued walking home with my husband holding my hand, willing his strength to me.

I know now, that it was the shock, that stopped my tears. I reasoned that maybe it wasn't my Dad that had died. Maybe the jungle drums that had brought us the news were wrong. Deep down I knew that wasn't true though.

The last week has passed in a bit of a blur, me not knowing how to feel. Do I feel angry? Am I allowed to feel sad? Do I feel sad? My friends are supporting me, bringing me flowers and cards and love and those who know me very well, treating me just the same as always. Teasing me, giving me projects, letting me sit with my mind wandering a bit before gently bringing me back into the conversation.

Those to far away to be a physical comfort have sent me messages via email and facebook. Messages of their own personal stories of grief, some having lived through situations almost identical to my own. Be kind to yourself they say, remember the good times, allow yourself to feel what you want and when you want to.

I remember the love.
Family Life