- May 12, 2018
I'm currently sitting in my living room awaiting a delivery of some fitness equipment and pondering that if I make a cake now and eat it before the aforementioned fitness equipment arrives, will it count calorie wise? 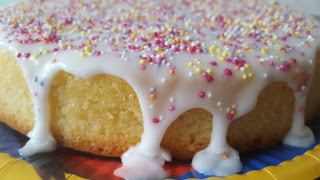 This week is Dan Jon's birthday on Tuesday and so he's had more input into what we eat this week and has picked a few of his favourite meals, but has also been quite kind and thrown in a couple of meals that his Daddy and Sister would love.

Luckily for me, I sort of don't care what we eat as long as we do eat!

Dan Jon and I are planning one eating our kebab and then escaping to our rooms, so that we don't have to score the costumes, staging and singing with Flyfour and Top Ender. Dan Jon has an evening of computer games planned, and I an evening of binge watching Netflix!


Dan Jon decided a Sausage Roast, was the only way to go this Sunday. We agreed the Sticky Sausage one would be best, as we can pretend to be super healthy because it has apple sliced in to it!


I think the meal title says it all!


Oh my goodness, I love this kid. So, Dan Jon would like a Tea Party with lots of cakes, sandwiches, fruit and a Double Decker Victoria Sponge as his birthday cake. I would show you his pinterest board, but instead here's mine.


Dan Jon again! He asked for a Panini with Mozzarella, Meatballs and not too much red sauce!


We had a lovely veggie curry a couple of weeks ago, and I added some chicken to the leftovers, which was even nicer. So we're having that from the start this week!


I was looking in the cupboard to see what we had when some Lasagne sheets got in the way, so I decided to use them but with a twist because I really didn't fancy anything too heavy.
Family Life Food Main Meal Meal Plan