- May 26, 2018
Aww, the magical time of year where the children realise that it's nearly the Summer Holidays. That this half term will be the last of the School year for them. That in just a few weeks, Dan Jon will be a Year Six, Top Ender will be a Year Ten and me? Well, I'll be me doing what I need to do and panicking that Dan Jon will be in year six and Top Ender will be in year ten and I'm not ready for my Baby to be about to leave Primary School. 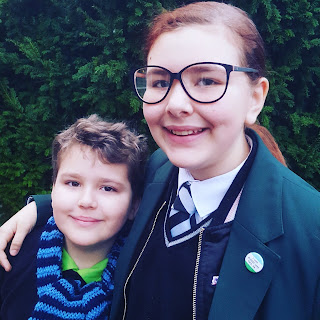 Well, enough melancholy, on with the food. Oh, and this week we're going to have Sandwiches for lunch (probably ham, occasionally cheese) and it'll be accompanied by some snack like Crisps, or Crackers and some fruit or veg... it's going to be great!

Flyfour had to work late last night, which meant we didn't get to eat our ribs. So we're having them tonight. Which is good, because they've had all night to marinate and should be super tasty this evening. If the weather improves, I may even consider putting them on the BBQ, but judging from the weather forecast, there will be no BBQ this weekend!


I really wanted to do this on the BBQ, but since thinking about it have started craving it... I've decided that we should bake the potatoes and Salmon in a foil parcel, one each and along with some other veggies, carrots and runner beans perhaps.


This is one of my favourite meals as it is so quick to put together, you just fry together some bacon, mushrooms and onion whilst boiling some pasta and then after draining the pasta, mix the bacon, mushroom, onion mix together in the pasta along with a dollop or two of cream cheese.

Tasty and cheap and it works well with a pasta that can scoop a little bit of sauce or similar.


I love when the children make pizza together, it's so easy and simple and cheap. We'll have plain pizzas (as in just tomato and cheese) because that not only makes it cheaper, but I think makes it tastier too.


Whenever I make a meal I somehow manage to make an extra portion or two. Sometimes, I use these for my lunch the next day, or if they are suitable, I'll portion them up and put them into the Freezer. Tonight, that's what we're having.

Everyone can pick something that they want and have that!


A fun meal again this evening, some Wings and Wedges because who doesn't love getting down and dirty with some wings?!

I'm planning on making double the amount of wings so that if needs we have them spare for tomorrow or more likely, for Flyfour and I to snack on about an hour after we declare we are full and will never eat again.
Family Life Food Main Meal Meal Plan