- September 13, 2020
Last year, one of my cousins invited me to a party she was having. I was excited to go because I love my cousin, (True fact: I love all my cousins) and I wanted to celebrate with her, so even though my cousin lives in what I would call, the middle of nowhere and I wouldn't have Flyfour with me to drive or navigate (he was going away for work) it was on the calendar.
It was a great evening, full of fun and on the way home roughly thirty minutes into our journey, my car decided to tell me that it was really needing some petrol, and as it was a fairly new to me car, I wasn't sure if I was going to get to a Petrol station before the car ran out of fuel and I'd end up in the middle of nowhere, with nobody around to rescue us and we might freak out a little.

Luckily I was using google maps and was directed to a petrol station, about 15 minutes away, but when I got there it was CLOSED! I redirected to the next nearest Petrol Station, another 15 minutes or so on from the detour we'd already taken. The entire time I was calmly praying under my breath and willing the car to go just a few moments longer. Somehow we made it, my family not knowing how close to disaster we were.
I've thought about that day and that night a lot over the last year. 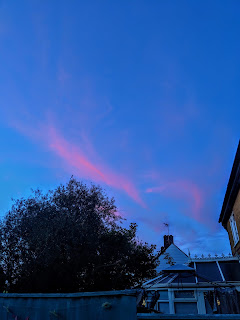 Flyfour was a great husband and had filled the car with petrol, checked the tyre pressures and the oil and everything else that needed to be checked before a long journey the day before the party so that all I would need to worry about was driving through a part of rural Norfolk that I'd never driven in before and getting my Aunt, Mum and children to the party on time.
I didn't need to think about anything, it was all taken care of because Flyfour and I worked together to ensure I was ready.

Flyfour and I didn't factor in that due to a last-minute change of plans I'd need to take Flyfour to the local airport on the morning of the party. This would have been fine. It was a great journey on a beautiful day and Flyfour and I enjoyed chatting together and were glad that despite his last-minute change of plans we were still prepared for what life threw our way.
I've thought about how we were prepared for those last-minute change of plans because we had prepared the day before to ensure the car was ready, rather than leaving it to the morning, how I was prepared to go to the party that evening and have fun but how I didn't think quite fully about making sure I was ready for what happened after getting to the party.
I realised that this was my personal modern-day version of the parable of the ten virgins.
If you're not familiar with the story, ten women were picked to escort a bridegroom into the celebration and were to carry with them a lamp or a torch. All they knew was that the bridegroom would come at some point that night. Five of the women were prepared with extra oil for their lamps, they thought about it, they knew that they needed to be prepared, to rely on themselves. The other five women didn't think beyond the first few hours and when they did realise that they'd made a mistake, they first relied on others to help them and by the time they thought to help themselves, it was too late.
I thought I was prepared. I thought that because Flyfour had prepared the car for me because he had filled the car with petrol and checked the tyres and the oil and the screen wash and the coolant that all was well.
I didn't think about my return however and I think it's exactly like being a Christian.
I might think that I'm a good Christian because I know a few Scripture stories, or because I serve my friends and family. I might think that I'm a good Christian because I go to Church on Sunday or because I hold a current Temple Recommend or because of a million other reasons.
But.
If I'm not living my religion every moment of every day? Then I'm not a good Christian. If I let my standards slip then I'm not a good Christian. If I forget that I am a cherished daughter of God, that I have a part in a plan then I'm not a good Christian.
As I've been thinking about this I've realised that it's not a change of attitude, it's not about being prepared, it's about being present and making good choices always, something that I think all of us would agree is important.
Family Life Religion