Am I Wrong In Exposing My Children?!

- September 14, 2020
At some point, Flyfour heard Gary Barlow singing "One more year in Yorkshire" on the radio and played it to the children and I. The time I most clearly remember it being played was whilst we were in a traffic jam in Ireland and the whole family were singing along. The song is amazing, it is and I'm pretty sure always will be, one of my favourites from all musicals and personally I think it is one of the cleverest openings to a musical, in this case, it's the opening to "Calendar Girls The Musical".
Not too long after our trip to Ireland, Flyfour found that the musical was coming to Northampton, which is just up the road from us here in Milton Keynes and we decided that we would totally be going and so purchased four tickets. We joked on Facebook before we went into the theatre that we were sure we were going to be the youngest people there, but we didn't realise that we really were going to be the youngest people there! 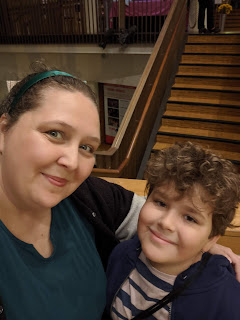 There was a lot of not so discreet glances at us in the auditorium and as we waited in the bar area to be admitted as people clocked our then eleven-year-old and then saw him sitting two rows from the front, but we didn't care. To start with I thought it was just that the other audience members were worried that Dan Jon was going to disrupt the performance, but as you know my children have been going to the Theatre almost since before they could walk but then listening into one conversation, I realised it wasn't because they thought they would be disruptive, but because of the nudity in the show they were questioning my parenting!
This did annoy me a bit because we know what our own children are capable of appreciating and understanding and yes Dan Jon wasn't looking forward to the "naked bits", but he was looking forward to seeing the show and understanding how some of the songs we knew fitted into the storyline he kinda knew, plus did they really think that there was real nudity? I mean most of the cast would be wearing body stockings or similar, unlike Hair which I'd taken Top Ender to see not that long before!
During the interval, whilst the children and Flyfour went to the bathroom, a couple who were sitting near to us struck up a quick conversation with me. They had also noticed that some of the other patrons that evening had been giving us not so discreet glances and some being just quite rude and giving open stares and had overheard some of our conversations about other shows we had been to see in the last year or so and wanted to say they thought it was great that we were taking our children to the theatre and not just to traditional kids theatre productions too. I had a great chat with them about different shows we'd both seen and ones we were planning on seeing in the not too distant future (I kept telling everyone about Six at the time).
The whole situation reminded me of when we went to Ireland and saw the Patrick Hennessy exhibition and someone tried to tell me that it wasn't suitable for my children to view. I mean it's like saying The Thinker or The Birth of Venus or David or some other great piece of artwork that depicts someone in the nude isn't suitable for children to experience.

The nudity, just like in the original calendar and the artworks I've mentioned, isn't there as erotica or as pornography. The nudity is part of the storyline, it is about acceptance and understanding and feeling comfortable in your own skin (which the show has at least three storylines about for different ages, different types of people and even for the men) and about how a group of women did something out of the ordinary and caught the imagination of, well the world pretty much!
Am I wrong? Should I not expose my children to things like this? Let me know what you think in the comments or send me a DM!
I guess as I didn't do a blog post at the time about the show I should mention one or two things. The first thing I have to say about the show is that I have never cried so much or laughed so much whilst watching a musical and the sneaky sidelong looks at Dan Jon, Top Ender and Flyfour at various points during the performance showed that they were in the same state as me! The second thing I have to say is how brilliantly the staging was, the set design was great, the costumes were fab and the camaraderie amongst the cast was even better.
Family Life Theatre